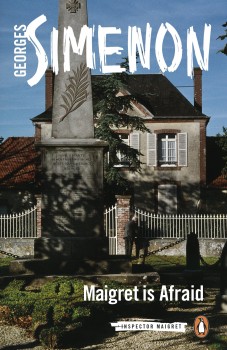 Maigret is on a train returning from an international police conference when an expensively-dressed man recognises him and begins to engage him in conversation. He seems to know why Maigret is on the train.

Inspector Maigret has been attending the international police congress in Bordeaux and, instead of returning directly to Paris, is taking the opportunity to visit Julien Chabot, an old student friend, in Fontenay-le-Compte. He is travelling by train and doesn’t really want to engage in conversation with the elderly man in his compartment, having already guessed from his appearance that he regards himself as part of an elite. He is puzzled, however, when the man not only recognises him but also appears to know the reason for his visit.

The situation is clarified for him on his arrival by a newspaper reporter who assumes that he has come to investigate what he calls the Courcon case. Apparently, Vernoux de Courcon, Maigret’s fellow passenger, was the brother-in-law of Robert de Courcon, who had been murdered in the town four days previously. Furthermore, a second murder – this time of an old widow – had taken place two days later. In both cases the same weapon appeared to have been used to bludgeon the victim to death.

This is an unusual Maigret story because he is not officially concerned with the investigation and is reluctant to be anything but an interested observer. Certainly, he has no desire to interfere with the detectives assigned to the case, even though it is clear from his reception in the town that his help would be appreciated. Maigret, however, is taking in every detail of the case and forming some theories as to who the murderer might be.

What he notices in particular is the way in which society appears to be organised in the small town. The de Courcon family is old and established and clearly regards itself as having what amounts almost to a governing role. Certainly, it inhibits the police in their investigation – a fact noticed by the ordinary citizens of the town who go so far as to form their own vigilante group. They are particularly suspicious of the man who discovered the body, Vernoux de Courcon’s son, Dr Alain Vernoux, who has always been unpopular in the town. Maigret has some social intercourse with the family, particularly at a bridge party given at their house, and begins to see that the family is not as united as outsiders believe.

Social contrast, together with sympathy for the underdog, is a theme present in many Maigret novels, but in this case it is all-important and is at the root of the murders that have taken place. In fact the emphasis on it is far more interesting than the resolution of the crimes themselves. We cannot help but be concerned, for example, with the fate of a young girl, mistress to one of the men of the de Courcon family, and living in poverty.

When a third murder occurs - this time of the town drunk – it doesn’t cause quite the same stir but the reader sees it as part of the same disregard for the poor and unfortunate. One can’t help but feel that this was of greater interest to the author himself than the final revelation of the criminal because when we do learn the truth it is not entirely convincing and doesn’t carry any great conviction. It has the feeling of being almost incidental to the much more interesting depiction of life as it is lived in the small provincial town.