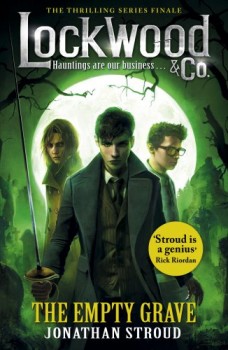 Lockwood and Co are up against enemies old and new as the series reaches a shattering climax.

There are some series you just don’t ever want to end – and Jonathan Stroud’s Lockwood & Co falls into that category for me. The Empty Grave is the fifth and final book featuring one of London’s smallest – and most ramshackle – psychic defence agencies.

The agency consists of stylish and debonair Anthony Lockwood, bookish George Cubbins, resourceful Lucy Carlyle and their associates: Quill Kipps, once an operative with a rival agency but now, at the grand old age of 22, unable to see ghosts without the aid of spectral googles, the stylish and competent Holly Munro, and the relic hunter, Flo Bones, who looks like a bundle of rags tied up with twine and smells like something from the sewers. Except for Kipps, they are all still teenagers and so can see and interact with the numerous Visitors, as they are euphemistically known, who throng London, ready to prey on anyone foolish enough to be outside after dark.

The Problem, as it’s called, started 50 years ago, and is being kept at bay only as a result of the foresight and bravery of Marissa Fittes and Tom Rotwell, who pioneered the first agencies to fight back against the ghosts and other malevolent spirits who stubbornly refuse to move on without a fight. Marissa Fittes’ granddaughter Penelope is now head of the Fittes Agency, but Lockwood & Co have suspicions about her, and intend to do some breaking and entering to prove their point. Their target is Marissa’s tomb in the Fittes mausoleum.

The Empty Grave is a fitting finale to a stunningly good series of young adult adventures that combine action, adventure, humour and fright into a spine-tingling package that is up there with the best. The characters have all deepened as the series progresses, with old opponents now working together, albeit reluctantly at times. Lockwood’s recklessness with his own safety is very much to the forefront and he appears to be hurtling towards self-destruction with only Lucy to stand in his way and attempt to keep him grounded. George is as chaotic and brilliant as ever, and Holly and Kipps provide plenty of wry humour and commonsense.

But in many ways, the relationship that has matured the most is that of Lucy and the sarcastic, unpleasant skull that talks to her from inside the silver jar that keeps it imprisoned. Only Lucy can hear the skull, and only Lucy can decide whether she trusts it or not. The brief flickers of trust are all too often swept away on the relentless tide of unpleasantness that sweeps out every time the skull opens its mouth, but despite that, there’s a clear bond between the skull and Lucy that is one of the central themes of the book, perhaps even equal to Lucy’s relationship with Anthony Lockwood. Jonathan Stroud certainly wins the prize for the most unusual love triangle in any book.

The action scenes are as brilliantly inventive as ever, with magnesium flares, bombs made of iron filings, silver nets, lavender and a selection of steampunk weaponry, all set against the eclectic mix of old and new that the books juggle so effectively. Lockwood & Co are battling for survival against both human and supernatural enemies and it’s by no means certain that they will all come through, especially when they must cross to the Other Side in a bid to escape their pursuers.

I now want to read the series again from the beginning, savouring every moment and picking up nuances and detail I might have missed the first time. There’s also a possible television series to look forward to. I just hope they do justice to the entrancing world Stroud has created and the great characters that people it.