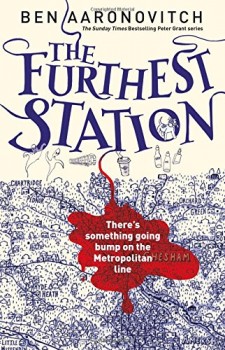 When things that normally go bump in the night start disturbing commuters on the tube, PC Peter Grant gets dispatched to sort out the problem.

London’s Metropolitan Line is bad enough in rush hour without commuters having to contend with spectral goings-on as well as backpackers, over-sized pushchairs and people with suitcases the size of small cars. When the police start to get reports of ghosts turning up to deliver urgent but largely incomprehensible messages, it doesn’t take long for what is more commonly referred to as ‘weird shit’ to turn into a case for the inhabitants of The Folly, one of the capital’s more unusual policing outposts.

PC Peter Grant and the occasionally bemused, always dependable Sergeant Jaget Kumar are despatched to investigate the things that don’t just go bump in the middle of the night. Even Toby, the Folly’s small, scruffy dog, gets to play a part in the investigation, as does Peter’s vastly entertaining niece Abigail, currently doing the most unusual work experience assignment ever.

Few people manage to portray London as well as Aaronvitch. Despite the very real setting, magic seeps from its pores and always seems utterly at home amidst the more mundane side of the city, if anything about London could ever be described as mundane. The characters are solid and real, even when they turn out to be ghosts that simply melt away after passing on their messages.

A search for a missing woman takes on an entirely new dimension when set in a world where The Folly exists, and although short and almost deceptively simple, The Furthest Station still bears witness to Aaronovitch’s skill at world-building and story-telling, and no one has ever made the Metropolitan Line quite this interesting before!

The Rivers of London series is an ever-evolving delight. I’m a total sucker for any form of urban fantasy or magical realism, and these books hit the spot every time with their skilful blend of policing and rather more arcane matters. My only disappointment with the latest outing for Grant, his urbane boss Nightingale and co was its length.

The book barely qualifies even as a novella; a long short story would be a better description, which is a shame, as this is a premise that could have easily swelled to occupy more pages, but maybe the idea was to whet appetites for a longer story. At least I hope that was the idea! I need to know more about the talking foxes and, as ever, would like to see more of Peter and Nightingale in action. And I definitely want to see an awful lot more of Abigail.