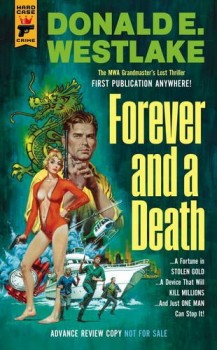 Forever and a Death

Millionaire businessman Richard Curtis, who was forced to leave Hong Kong when the Chinese took over, plans a terrible revenge.

Millionaire businessman Richard Curtis is redeveloping an island off the Great Barrier Reef, making what was once a wartime Japanese air base into a holiday resort. To get rid of the old structures, his civil engineer George Manville has developed a method whereby a series of explosions will set up a soliton or standing wave, liquefying the ground and destroying everything on the surface.

The process is being watched by environmental group Planetwatch, who are concerned that the explosions will damage the reef. One of their volunteers, Kim Baldur, decides to dive into the sea in the hope of stopping the explosions, but there is no fail-safe. Amazingly, Kim survives and is picked up by Curtis’s yacht, although he tells her friends that she is dead, and he intends to make sure that she is.

The transformation of the island is more than it seems. It is a test of a concept that will exact revenge on Hong Kong. Curtis lost a fortune when the Chinese took over Hong Kong and he intends to retrieve what he has lost and more.

Manville and Kim manage to escape, but Curtis’s thugs chase them across Australia to Singapore and then to Hong Kong. Will they convince the authorities that a respected businessman plans to kill millions?

This book is trailed as “the Bond that never was.” The author was commissioned in 1995 to write a script for the next Bond movie. For political and financial reasons, that film was never made, but the story was re-purposed into the novel we now have.  Whilst it is an action-packed thriller, a Bond it isn’t.

Yes, there is the villain who intends to cause a major catastrophe, but he is a man on a mission of revenge, not a criminal mastermind. There is a beautiful girl pulled from the sea, but she is far from a femme fatale. The thugs are just that and the ‘Bond’ character, George Manville, is an engineer who finds himself up to his neck in intrigue when he would be happier with his equations. From time to time he surprises himself with his own capacity for violence, but I couldn’t help getting the feeling that he would just prefer a nice cup of tea.

It all feels a bit too domestic to be a Bond story. Despite the extensive afterword explaining the book’s origins, I could not imagine the story translated into Bond’s universe and I could not see how or why the British Secret Service would get involved in defusing the plot. As a thriller, it is exciting enough, but it doesn’t live up to its premise.