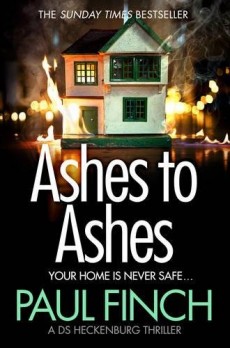 A killer has a caravan kitted out as a torture chamber, and he has moved to Bradburn, home of DS Mark ‘Heck’ Heckenberg. In the same town, there is another monstrous killer who, armed with a flame thrower, is burning his victims to death

DS Mark ‘Heck’ Heckenberg is seeking a John Sagan, a sadistic murderer who tortures his victims to death in a specially commissioned caravan known as the Pain Box. Following a lead, he ends up pursuing Sagan through South London, only to lose him at the last minute. Evidence suggests that Sagan has moved to the northern town of Bradburn.

But Bradburn is not any northern town: it is Heck’s home town and it’s full of very bad family memories. However, the police teams of Bradburn are grateful for Heck’s local knowledge and his help with a case featuring a very disturbing series of murders where the victims are burned to blackened cinders by a murderer wielding a flame thrower.

There is significant strife between warring criminal factions in Bradburn and each blames the other for the serious and brutal killings that are taking place. By flouting convention, and by taking breathtaking risks, Heck meets the leaders of each of the factions and challenges even the incoming Russian influence regarding the dealing in drugs.

Heck has not visited Bradburn since his parents disowned him after he joined the police force. On this return he re-establishes contact with an old girlfriend and his Uncle Pat, the local Catholic priest. Unfortunately he also brings significant trouble their way.

At first I found this book rather difficult to engage with, but this did not last for long. I think that I suffered from unfamiliarity with the characters, as this is the eighth in the series of novels about Mark Heckenberg. Once I understood the personalities and their various inter-relationships I quickly became absorbed in the pace and excitement of the story. The chase scenes are breathtaking and highly cinematic in their scope. There is no doubt that this book would make an excellent filmed drama, and is reminiscent of the work of Jason Statham – who really should be cast as Heck.