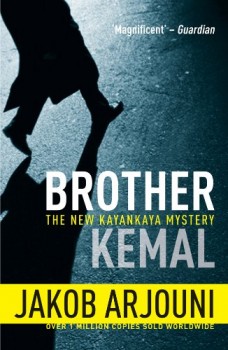 PI Kemal Kayankaya is employed to find a wayward 16-year-old and to protect an author from attack, but finds the two cases overlap.

PI Kemal Kayankaya is of Turkish extraction, but was brought up in Frankfurt by German step-parents. He is called to an upmarket part of town by Valerie de Chavannes, whose 16-year-old daughter Marieke has been missing for several days in the company of Abakay, a dubious charmer.

Kemal makes excellent progress with the case, but his methods leave him exposed to action by his powerful uncle Hakim, and the police. The same day he is hired by a publisher to protect author Malik Rashid from religious zealots. Kemal suspects that the job may be more about generating publicity than combating any real threat, but it turns out Rashid is at risk, if only because of his connection with Kemal.

Kemal is an interesting protagonist, a private eye who has been around enough to recognise the gaps in his clients’ instructions, and not afraid to let them know it. His foreign appearance and the resulting prejudice have contributed to a sizeable chip on his shoulder, and a somewhat cynical view of human behaviour. As other critics have observed, Arjouni’s Kemal is reminiscent of Raymond Chandler’s Philip Marlowe, in the coolness which the protagonist brings to each confrontation, and the rapidity with which he unearths the salient facts. Kemal always seems to be one step ahead of his interlocutors, whether they be clients or threats.

His colouring marks him as different from the majority population, for whom it carries certain implications. While these assumptions are not generally justified, in Brother Kemal they do result in him securing employment. Valerie feels that a Turk will be better able to tackle another from the same ethnic group, and Rashid wants Kemal because he supposes that Kemal is a Muslim. Kemal has no problem with these preconceptions, but the race issue is always the elephant in the room. In his free time Kemal tends to associate with other outsiders. His long-time girlfriend is German, but someone with an adventurous streak who funded her purchase of a restaurant through a year working as a prostitute, not the most respectable route to independence.

Jakob Arjouni died at the early age of 48, but left a substantial body of work including several Kayankaya mysteries. The series has received critical acclaim in Europe, in UK and in USA.  With plenty of action, a quick-thinking protagonist with a sense of humour and snappy dialogue that survives translation, what’s to dislike?