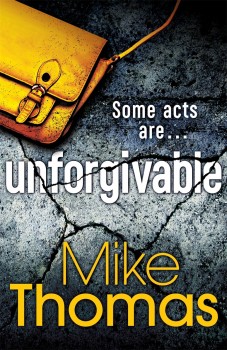 No wonder Mike Thomas lives in the wilds of Portugal! He’d hardly be welcome back in his native Wales where his noir procedurals have excoriated the inefficient and PC-bound South Wales police. His second novel The Ugly Bus, the story of a public order unit, has been snapped up by the BBC for a six-episode series which will further spread his less than complimentary view of the force he used to serve.

Now his breakneck latest, the second in the DC Will MacReady series, is likely to have the Welsh tourist board reaching for the smelling salts! This is Brit grit at its best. It’s a complex, contemporary and disturbing story, ripped from the headlines, which offers no easy answers to either its outstanding characters or the reader.

This is a high-adrenaline, close-to-the-bone read, with blood on the streets, the hate and fear of urban terrorism in the air, a taut, pacy, and grippingly atmospheric account of events over five hectic days. It opens, literally with a bang.

Vibrant, multicultural Cardiff, with all its contrasts between rich and poor and the effects of a hot summer on its mood, is celebrating those differences with a ‘souk’ which becomes the target of a terrorist bomb attack. As more attacks follow fear paralyses the city and pressure mounts on the already stretched police.

Thomas is not just content to write what he knows and also uses his experience to speculate with some accuracy on what goes on inside the heads of those prepared to commit such atrocities. His narration has the vividness and detail of someone who has walked and driven the streets of Cardiff’s busiest neighbourhoods in uniform, public order units, drugs teams and CID for more than two decades, and has done so with real observation and understanding.

To expand further on this tightly crafted and intense story which twists its way through connected plots would only involve spoilers. The switching of points of view between terrorists adds to the drama and makes the story all the more realistic.

Will MacReady first appeared in Thomas’ previous novel Ash and Bones. His complicated personal life – his father is in prison for murder and his brother in court on domestic assault charges, while he himself is involved in a relationship crisis – allied to his wry, often jaundiced attitude to the job, senior officers and others, provides plenty of rough police humour.

This is a harrowing novel with some of its most disturbing scenes coming in the aftermath of the bombings. The plot feels all too real and is bang up to date with its references to social media reporting. The level of detail and accuracy is, as with all Thomas’ books, maintained right through to its gripping conclusion – and his portrayal of the attitudes of ordinary policemen and women to the over-politicised, accelerated promotion, management speak, PC idiots who now run our forces should be compulsory reading for our MPs.

This is another great story from a man who has bought the teeshirt and tells it like it is for those we rely on to keep us safe.