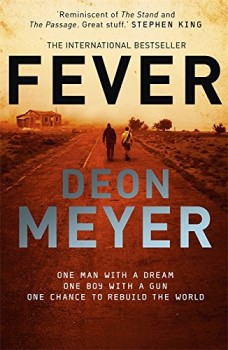 In a world where the majority of the population has been destroyed by a pandemic, an altruistic academic sets out to build a society free from the pressures of South Africa’s past.

Deon Meyer’s brilliant and atmospheric Fever is part sci-fic, part survival adventure, part coming of age story, set in a South Africa stripped of nine-tenths of its population by a deadly pandemic. Meyer, author of the Benny Griessel detective series, has quit his usual genre of contemporary crime to produce an action and emotion-packed exploration of humanity at its best and worst, posing the question of how you would react as a survivor if the world we know ended tomorrow.

Meyer poses a variety of fundamental questions through the eyes of the altruistic academic Willem Storm and his young son Nico and those they meet over a ten-year period after a pandemic has destroyed the population. It is a study of man’s relationship with both his fellow man and his environment under the most extreme of circumstances and follows the development of the young Nico from a frightened boy to the threshold of manhood as he and his father struggle to survive in this post-apocalyptic world.

Willem aims to build a diverse and equal community of survivors in an idealistic setting. Given multi-racial, post-apartheid South Africa’s recent past, is this an impossible dream?

If there is to be a criticism of this epic, it is that his emotional speech extolling unity, is somewhat cancelled out by the facts of the story. Diversity seems to stop at race.

In a community which swells to more than 5,000, there appears to be only one Muslim, the odd atheist, and possibly a couple of homosexuals. All the rest, black or white, are Christians of some sort – including a wonderfully depicted black African evangelical fundamentalist minister. As the community develops, its challenges, both practical and physical, increase. They are not the only survivors – and simply to continue must fight off marauding gangs of motorcycle thieves controlled by an untraceable criminal network.

But this brutal, insightful and unflinching tale of the excesses of humanity, read in the light of epidemics such as AIDS and Ebola, will make you think deeply and warns of possible dangers ahead as at the same time it entertains with mystery, thrills, and frequent and violent action. Meyer is a masterful writer. His characters are richly drawn and the hypothesis all too realistic. His descriptions of the consequences of such a tragedy are well researched and all too believable.

There is some positively sparkling prose in what is a long story told partly through first person narration and partly through transcripts from biographical recordings. Meyer’s eye for South Africa and his keen view of people and places bring the story to dramatic life. Nico’s development from frightened boy to hardened soldier under several outside influences, notably the implacable and impenetrable warrior Domingo, his relationship with his father and his struggles with teenage emotions provide a very human focus for what is otherwise a story on an epic scale.

While the ending is not quite as strong as the rest of the book, it is still not beyond the realms of possibility. There are enough loose ends left unresolved to make you wonder if Meyer is considering a follow-up. Fever is a fine book, tackling questions few would even ask.