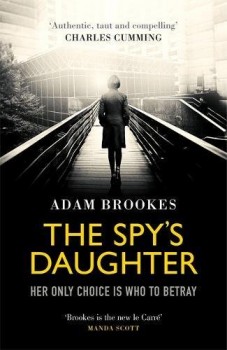 Pearl is an American teenager with a genius-level grasp of developments in artificial intelligence, only recently awakened to her Chinese parents’ plans for her future.

This final part of the trilogy, begun with Night Heron and Spy Games, reintroduces readers to British secret intelligence operatives Val Hopko, Trish Patterson and Philip Mangan. As the book opens, Patterson is newly posted to Washington. When an American intelligence operative apparently commits suicide, Hopko tasks her with getting details. Through an FBI contact, Patterson finds that the dead man had a basement full of secret material, which he may have been blackmailed to release.

Meanwhile, Mangan is chasing down a name and address passed to him by a man since murdered by the Chinese Ministry of State Security. His travel patterns are complex and off the grid in an attempt to evade MSS staff on his trail, but he reaches his target, and manages to pass an email address to a young girl who appears to have been drawn against her will into a clandestine meeting.

This new and central character is Pearl, the 19-year-old daughter of Chinese immigrants. Pearl’s insights presage a brilliant future at the forefront of developments in artificial intelligence, but she is the victim of a controlling father; worse, his interest in her prospects seems to suggest a special motive. When he drags the family off on foreign ‘holidays’, Pearl finally realises what is going on.

All the key players are gathered in Washington when Pearl takes off to escape the fate closing in on her. She is under great pressure and unused to negotiating the real world, so it is not likely she will be able to keep herself safe for long. Patterson and Mangan fear for Pearl and aim to protect her, as far as they can. But Hopko’s agenda is not so clear. Regular emails from BOTANY, a source in Chinese intelligence, appear in the text and indicate that SIS have another game running.

I think the series is excellent overall despite some problems with the structure of this final outing. In the first two books, the action flowed naturally from the circumstances; here Mangan’s initial foray seems hard to credit, even allowing for his desire to demonstrate his competence, and the meeting a fantastic coincidence. Hopko’s behaviour (and by implication that of SIS control) seems both clumsy and breathtakingly crude, not that this makes it entirely improbable.

In any event, the book takes off at an exciting pace from the start, and as with its predecessors there are glimpses of espionage tradecraft in exotic locations. The characters are great: Patterson, the ex-military black girl skilled in self-defence, Mangan the journalist and ‘natural’ spy, and Granny Poon, one of Hopko’s most reliable agents, returns to empty drop boxes and test the atmosphere.

The trilogy comes to an end with confirmation of the theme running through the series: that although individual agents may have the best intentions, it is in the nature of intelligence networks to use human material in a most inhuman manner.