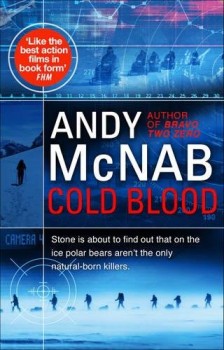 When his former CO calls in a favour, Nick Stone ends up on a walking trip to the North Pole.

Hard on the heels of the brutal murder of his girlfriend and their young son, ex-Special Forces soldier Nick Stone is contacted by his old CO. Cauldwell is calling in a favour and wants Stone to babysit his son and a group of former servicemen, who had all lost limbs in the war in Afghanistan, on a walking trip to the North Pole.

Their sponsorship has fallen through but Cauldwell intends to bail the expedition out. The only snag is that father and son are barely even on speaking terms and there’s no way that Jack Cauldwell will accept money from his father, so Stone has to keep the identity of the new backer a secret.

Against his better judgment, Stone allows himself to be railroaded into the job, but earning the trust of the group isn’t easy. The men are all haunted by their own demons and are determined to make the trek to regain some control over their lives and restore their own self-respect. Despite himself, Stone begins to wonder if the trip might even prove cathartic for him, too, enabling him to come to terms with the deaths of those close to him, instead of simply packing his grief away in a mental box and leaving it there to fester.

Tensions are high in the group, and it soon becomes clear that there’s more to the deal brokered by his old boss than meets the eye. But the polar ice cap isn’t the best place to pick a fight, especially when Stone doesn’t have a clue what’s going on or what stakes are being played for.

It’s never possible to fault Andy McNab when it comes to putting his own experiences to good use in books, and in this case all he’s done is swap the South Pole for the North, as it’s true that polar bears are a lot more threatening than penguins! The descriptions are vivid enough for you to want to put on another sweater and crank the heating up a notch or two. There’s plenty of his trademark black humour and the story is pushed along by the use of short chapters and even shorter sentences. There’s no extraneous padding and few wasted words.

The stark beauty of the frozen north positively jumps off the page, but you’re left in no doubt that exposure to the elements there will kill you almost as fast as a bullet, and it’s not long before those start to fly. After all, nothing is ever simple in Nick Stone’s world.

Despite the harsh terrain it depicts, Cold Blood is nowhere near as stark a book as its predecessor, Detonator. At the end of Stone’s last adventure, I was left feeling thoroughly depressed, but now it seems there might be some light at the end of a particularly dark tunnel.