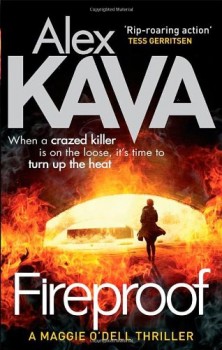 A serial arsonist is haunting the American capital. Local investigators target a young, white male giving in to anger or sexual impulse. But FBI agent Maggie O’Dell believes this is the work of someone far darker.

Maggie O’Dell’s fans will be delighted with the return of their independent, hard-nosed heroine in her tenth FBI adventure, along with other regulars from the series, the out and proud lesbian Julia Racine and the laconic and dependable RJ Tulley, as they track a serial arsonist around the nation’s capital. They're called to a warehouse blaze and this time there is an added twist – a human body. As the pace of the fire-raiser’s attacks increase, so too does the body count. So far, so typically Maggie O’Dell.

But there will be some readers, including me, who will think we’ve been down this road before and will be disappointed that it appears Kava is apparently beginning to write by numbers. Really critical readers with an interest in law enforcement procedure will have noted long ago that the FBI has no job description for a profiler; instead Supervisory Special Agents at the National Centre for the Analysis of Violent Crime based at Quantico, Virginia, construct profiles of unknown criminals and offer advice on case management and interviewing strategies. Competition for these posts is so great that virtually all these men and women have a minimum of ten years service and long experience of violent and sexual crimes and abduction. The clue to their work is in the ‘Supervisory’ – they don’t chase possible suspects into Washington’s sewers!

That said, the pace of the story is relentless, although the plot, while credible, is weak. While some of the supporting cast appeal, particularly the female cable TV camera operator, and the dialogue is always slick, one or two parts give the impression of bolt-ons. Maggie’s previously unheard of fireman half-brother makes his debut to complicate her personal problems further, but the fiercely aggressive TV reporter obsessed with O’Dell stretches belief a bit far.

It is also a little disappointing that the culprit is well-signposted quite early on and that the ending leaves the story open for another follow-up. Maggie’s unpopular new boss, a real Washington bureaucrat, expresses doubts about her mental stability – and after this I’m inclined to agree. Although Maggie gets her man – and again gets injured in the process – I hope this is a temporary state for both heroine and author, because Kava, on top of her form, is a brilliant thriller writer.