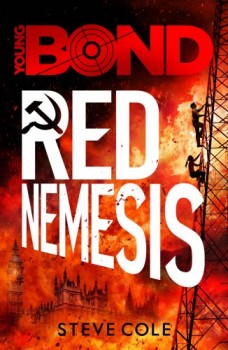 James Bond receives a mysterious package from beyond the grave and has to work out the meaning of the cryptic notes left by his father.

James Bond has left school for the summer and is on his way home with his Aunt Charmian when she breaks to news to him that he has received an unexpected package – the backpack James’ father Andrew had with him on the fatal day that both of James’ parents were killed in a climbing accident in the Alps. The backpack had been buried in the ice for three years and has only just been found, uncovered by a summer thaw.

The package from beyond the grave comes as a shock to James. It contains some clothes and a tourist souvenir that Andrew Bond had clearly been intending to give to his son – a little pottery model of St Basil’s cathedral on Red Square in Moscow. The memento was in an envelope addressed to James, but was never posted. In addition, there was a cryptic note to James’ uncle Max, but Max is now dead, so it falls to James to decipher his father’s note.

James’ quest leads him to Russia, in company with intelligence service operative, Adam Elmhirst, and very soon the pair are in danger from all sides, but are still no closer to solving the riddle left behind by James’ father. As usual, the bad guys are suitably ruthless, and James ends up on the run, in company with Anya Kalashnikova, a former ballet dancer who had been destined for great things before her own father crippled her, something Anya naturally finds hard to forgive, even if she understands the reasons behind his actions. James finds himself drawn to Anya, despite her open hostility to him and the havoc he’s caused in her life, but he’s also carrying the weight of his past encounters with girls and the knowledge that any relationship he forms is destined to be nothing more than transitory.

In the Young Bond adventures, the obligatory female companion is always more than merely decorative, and Anya Kalashnikova follows in a long line of feisty girls who can easily hold their own in the rough and tumble of this excellent teen thriller series.

Steve Cole has picked up where Charlie Higson left off, and this is his fourth adventure. It’s also his last, according to the publicity, but whether that means the last book in the series as a whole or just the last by this author, I don’t know. Cole has been a very safe pair of hands for Ian Fleming’s iconic creation, as was Higson before him. James has steadily matured through the series and is now on the verge of becoming a man.

If Red Nemesis is the last in the series, it provides a rip-roaring finale to launch James into his career. The stakes are high, the action is fast and furious and to succeed, James must surmount seemingly impossible odds. For anyone who knows the original books, there are always plenty of references to look out for. For me, the series makes an excellent prequel to Fleming’s own work.