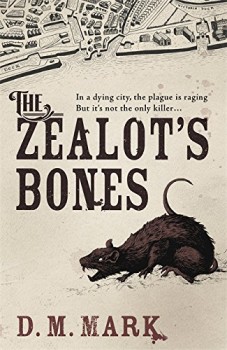 A Canadian academic, seeking the bones of the apostle Simon the Zealot, hires a discredited and psychologically damaged Afghan war hero as his bodyguard. When a woman who briefly brought peace to the soldier’s troubled mind is murdered, he sets out to bring her vengeance.

Name a physical or social condition, vice, mental problem, obsession, perversion, brutality or murderous madness and David Mark has it covered in 250 pages of occasionally and horrifyingly graphic detail. The Zealot’s Bones is his first venture into the field of historical crime, following his six-book series featuring Detective Sergeant McAvoy.

From the sordid and filthy gutters of a Hull in the grip of a cholera epidemic to a cellar full of bones and giant rats beneath an aristocratic home, this catalogue of horror is endless – and will take a strong stomach to survive.

A wealthy young would-be Canadian academic, seeking escape from his strict Quaker industrialist father, is looking for the bones of the little known apostle Simon the Zealot. Little is known about St Simon. Tradition, depending on which church you follow, puts the site of his martyrdom at either Pella in Armenia, Suanir in Persia, or quite unbelievably at Caistor in Lincolnshire where, on his second mission to Britain in 60 AD, he was crucified by the Roman procurator Catus Decianus, the man responsible for provoking Boudica’s rebellion.

The academic, who part narrates the story in letters to his sister in Toronto, has hired the former Major Mesach Stone, once a hero and diplomat, and survivor of the dreadful 1842 retreat from Kabul, where 16,000 British soldiers, women and children died of exposure in the winter snows of the Hindu Kush, or were massacred by Afghan tribesmen.

Stone, physically disfigured and mentally scarred by his experiences and guilt over the earlier killing of his wife by debt collectors, tries to obliterate his memories in a fog of alcohol, drugs and whores. He has become an obsessed and ruthless killer for hire, revelling in violence and death.

Only once has he been granted relief from the nightmares which possess him – in a chance encounter with a prostitute in Hull’s seedy dockland. When she is brutally murdered, a killing which goes unnoticed in a city abandoned to the grip of a cholera outbreak that sees its poorest dying in their thousands, he sets out to uncover the madman who tortured and eviscerated her.

As he investigates he realises she is one of many – and vows vengeance on behalf of all of them. The trail of the Saint’s bones lead to an isolated aristocratic home, where the mother has been driven out of her mind by the death of her daughter; the father is a brutal tyrant; and the homosexual son a giggling fop who is also an artist with an enormous talent for portraying suffering. The family is guarded by a monosyllabic giant of a Welshman.

Mark brings some wonderful characterisation, particularly in the minor roles, to what is a fairly simple plot. His writing is quite brilliant. But by the time you have come to the predictably blood-soaked and violent end of this Victorian saga, you might do well to remember the mediaeval prayer: “From Hell, Hull and Halifax, may the Good Lord deliver us” – and add to that Mark’s twisted and quite terrifying imagination!