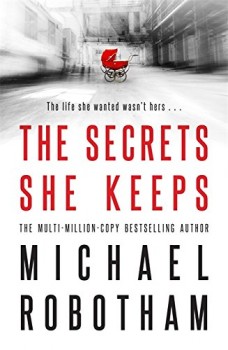 The Secrets She Keeps

When Meghan’s seemingly perfect life is revealed to be a tissue of lies, the results are devastating.

Agatha is a disgruntled shelf-stocker in a London supermarket. Hardly surprising with a boss like hers. And her private life is not exactly shining; she is heavily pregnant, and her British navy boyfriend has not returned her emails or calls. Worse, he has unfriended her on Facebook.

Meghan has two children and is expecting her third; her oops baby. Although her husband Jack was not keen on having a third child at first, he has come around. And Meghan has everything Agatha wants: a handsome, successful husband, a beautiful home, her glorious kids, and money. But Meghan has a secret, one which could tear her life into shreds.

The women are worlds apart, but while Meghan is shopping, Agatha strikes up a conversation and finds out that their babies are due on almost the same day. Soon their lives are entangled, far more than Meghan realises. And as their due dates near, so does catastrophe for one of them.

I like Michael Robotham’s novels. His writing style is accessible, and engenders atmosphere. So I was thrilled when The Secrets She Keeps landed in my pile. As with all his books, he has a knack for drawing the reader in from the first sentence. This one, written in the first person, present tense gives the reader an intimate proximity as it swings chapter by chapter between the two main characters. And he cleverly gives us plenty of reasons to like both women at the start.

Unfortunately, whether it is the title or the hook-line on the front cover, the plot direction shouted out, for me, louder than the local town crier. I then spent the first part of the book wondering when the action was going to start. It was a walk through well-written treacle, where, although the author trickle-feeds backstory, and builds tension, it is just too drawn-out.

The second part of the book, whilst overall predictable, has enough mini-twists (and one even I didn’t see coming) that it becomes a psychological page-turner. The change of pace is dramatic.

Agatha should be the archetypal antagonist, but Robotham treats her so well that despite her despicable behaviour, it is easy to empathise with her broken character. Meghan is far from perfect; she is flawed, and I am sure many readers will blush, thinking there but for the grace of …

My suspension of disbelief did wobble a couple of times with out of character behaviour from Meghan, and a few actions that, as someone who has been pregnant three times, I found questionable. I found Agatha the more true-to-form of the two. She stuck by her beliefs, and for her, the end justified the means.

The introspections are well written, but I found the dialogue did nothing to make the two main characters distinct. Although less is more, and I am the first to grind my teeth when I read ‘tampered’ words in speech, there was not enough difference in their words and syntax. Yes, Agatha is supposedly intelligent, but she is portrayed as less educated than Meghan, and this does not come across in the way she speaks. The lesser characters leap far less off the page, except for Cyrus, who I would like to have spent more time with. Robotham, as always, brings life to the story with excellent attention to time and place. His attention to detail sets the reader truly in the milieu.

I found the climax somewhat trite, corny even. However, I did enjoy Agatha’s lack of desire to seek redemption. This is an easy, whilst disturbing read. It gives a wonderful insight into a less-than-perfect married woman’s mind, and one of a woman no one wants to cross, who could be living in a few doors away!