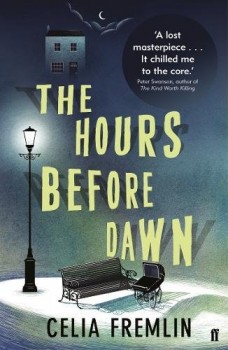 The Hours Before Dawn

Stressed suburban wife and mother Louise is grateful that their new lodger is quiet and educated, seemingly the perfect houseguest. But appearances can be deceptive.

Suburban London, the late 1950s – a time and place of relative luxury after the deprivations of the war. But not a life of ease for new mothers, and Louise is exhausted from baby Michael’s incessant nocturnal crying. It wouldn’t be so bad if her husband, Mark, and her two daughters, along with a plethora of self-entitled neighbours and friends didn’t use Louise as a door mat. Between the cooking cleaning, and general running around after everyone, Louise is on her knees.

However, she is not too exhausted to be surprised when Miss Brandon, a school teacher, moves in to their, frankly, shabby attic as a lodger. Her face is vaguely familiar to both Louise and Mark, but neither can think where they have seen Miss Brandon before. And with so much on her plate, Louise is simply grateful the woman seems undemanding. Moreover, their lodger seems impervious to the baby’s constant noise. Unlike Louise’s demanding neighbours.

But something is not right. Something is decidedly disturbing about Miss Brandon. Yet only Louise can see it.

What an honour and a rare treat it is to review a true timeless classic. Moreover, to re-read a novel whose quality I almost certainly didn’t appreciate the first time round when I read it as a young teenager. The Hours Before Dawn won the 1960 Edgar Award for the Best Mystery Novel, and justifiably so. It could easily win the same title in 2017, for though I was acutely aware of the time and place of this story’s setting, the writing style is sharp, evocative and ageless. The author could have written it last week as a retrospective glance at another era.

Written in the third person past tense, it could have been quite distancing. But it follows Louise so intimately, that I became her shadow, the author’s voice so concise, powerful and senses-driven that Louise’s conflicts are all-absorbing. Louise is utterly believable. As a mother of three, I understand her exhaustion, her sleep-deprivation, her sense of feeling overwhelmed, her almost paranoia. The syntax complements Louise’s struggle to keep up with the demands of wife/friendship duties and motherhood. Dialogue is realistic, witty and distinct, yet the content is entertainingly mundane, and entirely appropriate to the drudge of Louise’s life.

Louise and Miss Brandon are well rounded, and both beautifully flawed. The rest of the characters are portrayed in brief snapshots, but with attention to the kind of detail that pumps life into their veins and lifts them off the page.

The plot is simple, but the well-metered descent from normality to sinister is like watching the sun go down, knowing you are terrified of the dark. The insidiousness drips in, filling the reader with suspicion, yet we must wait until the end to understand the enormity of the evil within Louise’s house. The reveal of motivations may seem laughable to younger readers. But having grown up on the tail-end of post-war Britain, I appreciate how different the world was then and how people frowned on behaviour that is commonplace nowadays. Different values, different times.

Where my suspension of disbelief took a small knock was how Louise learned the whole truth. But I can forgive this little question mark, because it was so much better than an awful pantomime reveal, where the culprit vomits up his entire life history thinking he or she is going to get away with it.

While there are many classics that I adore, there are few among them that I would recommend as reading for today’s generation because the pace would be too sedentary for most. However, The Hours Before Dawn is one of those few. It is succinct, breathless in places and, once again, proof that brief can be beautiful.