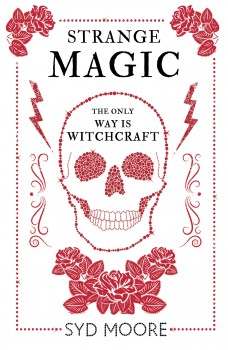 Rosie Strange has inherited the Essex Witch Museum from her estranged grandfather. She doesn't want it and is determined to sell it, but her first visit catapults her into the hunt for the bones of a buried witch, a crusade to save the life of a young boy and the uncovering of satanic worship.

Rosie Strange has inherited the Essex Witch Museum from her grandfather, a man she has not seen for many years since it appears her father had fallen out with him. Rosie does not want to own a museum, so she is keen to sell it and to capitalise on her inheritance.

When Rosie visits the old building she meets Sam, her grandfather’s curator, for whom she develops both antipathy and attraction. Rosie and Sam become involved in the hunt for the buried bones of a confessed witch who was hanged in 1562. It seems her son has possessed a young boy and will only leave him if he is reacquainted with his mother. The pursuit takes the pair on journeys across Britain, meeting a cast of potentially interesting characters on the way.

The book has the feel of being written to be the first of a series. Some of the characters are too good for their short appearance. There are plot lines that are not explored and which will merit being the centre of future investigations. The question of the selling of the museum is not, and I suspect will never be, resolved.

The book has elements of Dennis Wheatley in its descriptions of satanic interest, Harry Potter and spy comedy Kingsman in its secret agent involvement and, unfortunately, pulp women fiction in its shallow asides and descriptions of the attraction of the male protagonists. This makes it a confusing read.

The principle is sound: a witch museum with real stories and real artefacts and spooky interactions mixed with scepticism and evidence. The style, however, jarred for me. I found the conversational asides were definitely not endearing or helpful to the plot and they got in the way of some potentially fulfilling interactions and plot developments. It’s a shame really, as I think this could have been a very good book.