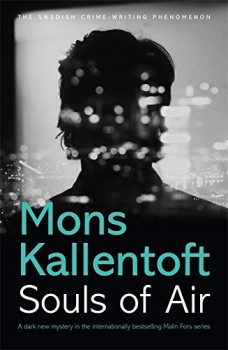 Malin Fors, Linköping’s top detective, deals with a matter too close for comfort – her daughter Tove has discovered the dead body of one of the residents at the care home where she works.

Tove Malin enjoys her summer job at Cherub old people’s home back in Linköping where she had returned after completing her college course and splitting up with a very rich boyfriend. She’s surprised by her own affection towards the residents and even though the work is backbreaking and badly paid, she feels that she has found her place in the world. The other carers struggle day and night due to ever worsening conditions, lack of money and cuts in resources.

Tove’s mother Malin, on the other hand, seems emotionally frozen, cold and dispassionate. However, this is clearly an armour that Malin has adopted to enable her to exist and to cope with life, following the disastrous spiral back into obsession and heavy drinking months earlier. This had devastating consequences and can be found in the previous novel Water Angels.

One morning at the beginning of her shift Tove discovers the dead body of Konrad Karlsson, a 79-year-old resident, hanged by his own alarm cord. This starts a series of life-changing events for both her and Malin, for the employees of the home, and the people attached to it.

What looks like a straightforward suicide baffles Linköping’s top detective Malin Fors and her team. But it seems to hurt Tove most as she cannot comprehend how Konrad could have done it, being half-paralysed and in really high spirits, even though he had spent years at the nursing home. The autopsy suggests murder. The team tries different angles in their search for the perpetrator. They consider mercy killing, and have questions about people who might benefit from the death of the old man, interrogating his loving granddaughter Gabriella, and estranged troubled adult children: son Yngve and daughter Margaretha.

Malin uncovers some disturbing facts about the home’s management and its millionaire owner Hans Morelia whose only goal is to make even more money and to protect his young daughter Lova. Cherub is run by his company called Merapi, which is on the verge of being sold to the Americans, and Morelia cannot entertain any suggestions that Konrad’s death is a result of the old man sending letters to the press and complaining about the deteriorating care.

The overworked staff have no time to provide quality care, and there is the general feel that old and vulnerable people are being neglected, which deeply affects Malin and Tove. While they deal with each other and the events at the home, they also re-visit their own personal tragedy and terrible conditions of the place where Stefan, Malin’s disabled half-brother, lives.

Overwhelming sadness and the desolation of people who have no hope is at the heart of Souls of Air, which is beautifully translated from Swedish by Neil Smith. Mons Kallentoft‘s dark novel, akin to social commentary, this time focuses much more on the relationship between mother and daughter. It’s a relationship that is brilliantly nuanced, moving between love, hate and indifference and eventually proves that in this case the blood is thicker than water, or alcohol. Yet Malin despairs of the similarities between their personalities that might push Tove towards the self-destructive path which she knows so painfully well.

The final twist in the book could be regarded as an example of poetic justice. The unexpected shocking event brings some sort of peace to one of the characters, yet it doesn’t really bring closure for others.