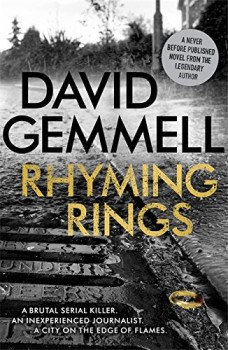 A serial killer is at work in west London. Young journalist Jeremy Miller desperately wants to cover the story, and soon finds an unusual angle: a woman who claims to be able to experience the victims’ dying moments.

I’m always dubious about ‘forgotten’ novels by dead writers that have been languishing unpublished for ages. There’s often a very good reason why they never got published in the author’s lifetime, usually that their writer – and probably publisher, too – felt they didn’t quite make the grade. So it was only the hook that Rhyming Rings, a crime novel by fantasy writer David Gemmell, combined crime and the supernatural that managed to draw me in.

I first encountered Gemmell many years ago in Legend, an epic fantasy novel that contains a siege scene that almost rivals the assault on Minas Tirith in Tolkien’s The Lord of the Rings, and have read most of his books since then. He excels at characterisation, and this skill is certainly evident in Rhyming Rings, which features young journalist Jeremy Miller, struggling to make his mark in the downbeat environment of a local newspaper that publishes once a week. The book is partly told from Miller’s view point in a first person point of view narrative from a man who is mostly very hard to like. He has a natural talent for opening his mouth and unerringly inserting both feet, and it’s a skill he exercises on every possible occasion.

A serial killer is murdering women on a west London estate and that’s the story Miller wants to cover, not cosy spreads about paralysed women looking on the bright side of life. But things look up when he interviews Ethel Hurt, a local woman who claims to be a psychic, and impresses Miller with her uncanny accuracy about his old Zippo lighter. She also appears able to gain insights into the deaths of the murdered women. The police take her claims seriously, but ask for her involvement to be kept out of the public eye.

The crime element of the book is fairly run-of-the-mill, with some parts of the story told from the point of view of the killer. Some clues are dropped and there are the obligatory red herrings. The story mainly comes alive through characters other than the rather obnoxious Miller. I was amused by harassed DI Fletcher, who never misses an opportunity to light up, and I particularly liked Mr Sutcliffe, the huge Matabele warrior from Rhodesia, who has ended up living next door to Ethel and sees himself as her protector.

The book is set in the 1980s and it shows. Everyone smokes, there are no mobile phones and casual racism and homophobia is utterly rife. According to an afterword by Gemmell’s friend Stan Nicholls, there are elements of the author’s own life in the book. The physical description of Miller matches that of his creator, who also worked on a local paper in west London and there are a host of other references that Nicholls points out. The only ones that jumped out at me were some references to fantasy novels.

I’m not sure Rhyming Rings lives up to the effusive introduction from long-time Gemmell fan Conn Iggulden, but Gemmell does deliver a reasonably solid if somewhat thin crime novel. The supernatural elements certainly brought the book alive for me, as did some of the people, but my enjoyment was hampered by a thorough dislike of its main character. For Gemmell fans, the book will no doubt hold some interest, but I’m not convinced it would have made the cut on its own merits. If, like me, you enjoy elements of urban fantasy, then it will also have some appeal.