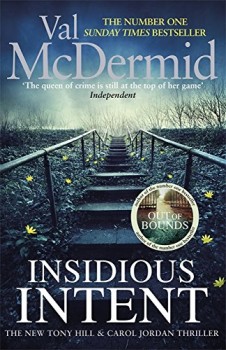 DCI Carol Hill and psychological profiler Tony Hill are up against a forensically aware killer who is determined to stay one step ahead of them, and is succeeding all too well.

One of the best-loved pairings in modern police fiction is back.

DCI Carol Jordan is struggling with the knowledge that she’s only in post as boss of the newly-established Regional Major Incident Team – ReMIT – because her own bosses conspired to quash a drink-driving charge. Psychological profiler Tony Hill is struggling as well. He seems unable to help his closest friend in her current downward spiral. Together, they make a formidable team, but Carol’s self-destructive streak is very much to the fore in this latest outing, and all Tony’s professional skills appear to be incapable of pulling her back from the brink of personal and professional ruin.

ReMIT is facing its first case: a murdered woman found in a burnt-out car in a layby on a Yorkshire road. The team quickly learns that there’s a serial killer on the loose, one who is smart enough to evade their notice as the killings mount up. He’s forensically aware and, with seemingly no link between the murdered women, ReMIT has very little to go on.

Various members of the team are suffering distractions in their private lives as well. DS Paula McIntyre is doing her best to cope with Torin, a teenager still struggling to cope with the murder of his parents. Gaining an instant family isn’t something Paula and her partner, hospital doctor Elinor Blessing, had ever planned for their lives, and Paula is doing her best to keep her concerns about the now-moody teenager from her equally stressed partner.

Their problems provide some human relief from the relentless nature of the killer’s crimes, and the problems allow digital analyst DC Stacey Chen to exercise her computer skills in coming to Paula’s aid. Whilst this strand of the story doesn’t relate directly to the main action, it does serve as an illustration of the way Carol’s team have been used to operating. They’re all quite happy to go off piste if the situation warrants it and therein lies their greatest weakness. When the deaths mount up and ReMIT comes under scrutiny, there are plenty of people willing to turn Carol and her team into scapegoats.

Insidious Intent successfully strips Carol Jordan of any of the coping strategies she’s built up since the horrific murder of her brother and his partner in the barn she then totally renovated and now lives in, surrounded by memories, no matter how hard she tries to push them back beneath the surface. Since swapping hard manual labour for a return to work, seduced by the chance to head an elite team of her own choosing, Carol has hit the bottle hard, a weakness that almost scuppers her shiny new job even before it’s begun.

It was obvious that the quashing of what was in reality a righteous collar would have ramifications, and that the conspiracy to save her professional life would quickly come back to bite her on the bum, and Val McDermid quickly piles even more guilt on her creation’s already shaking shoulders. She presents a convincing portrait of a woman pushed into a searingly painful downward spiral by her own demons as well as the machinations of other.

The police work is as convincing as ever, carrying the usual sharp ring of authenticity, proving yet again, if needed, that McDermid is still at the top of her game. She’s not afraid to stretch her creations to breaking point, and delivers a shock ending with her usual style. I’m not wholly sure yet what I think about the denouement, but the fact that I’m still thinking about it bears witness to McDermid’s ability to take me deep into the lives of her characters and make me care for them.

Insidious Intent is a police thriller of the very highest quality. I was hooked by both the main and the subsidiary story and kept there until I’d been swallowed whole. But be warned, don’t attempt to read the end of the book first, and do your best to avoid spoilers. The ending is one to come to with an open mind. How you react to it is going to be a very personal thing.