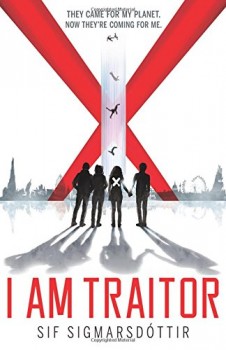 The alien invaders have already taken Amy Sullivan’s brother and her best friend. Now they’re coming for her.

Amy Sullivan is just like most 14-year-old girls. She wants to spend time hanging out with her friends either online or in person. She wishes her parents would stop fussing about and just let her get on with her life. She wishes they’d argue less. She also wishes the world wasn’t in the grip of an alien invasion, as that’s really cramping her style.

The visitors, as they’ve become euphemistically known, appeared without warning, and are snatching teenagers across the world. They’ve already taken Amy’s older brother and her best friend and she thinks she’s going to be next on their hit list when the huge tubes snake down from the alien spaceships hovering over the sky in London and suck up another bunch of kids. No one knows what happens to those who have been snatched, but there’s a growing resistance movement that wants to get their children back and they believe Amy can help them.

When Amy is taken forcibly to join the other stolen teenagers, she carries with her a small box from the resistance that she has to hand over to someone who will make themselves known to her, but on an almost unimaginably huge spaceship, living under a harsh regime, it’s hard to know who to trust.

I Am Traitor has echoes of John Christopher’s excellent Tripods trilogy and the more recent Robot Overlords by Mark Stay and it would translate equally well to TV or film. Despite her feelings of inadequacy, Amy is a charismatic and feisty lead character who is determined to carry out her mission to the best of her ability.

The brutal regime forced on the abducted teenagers by the Pronaxians has fostered a dog eat dog attitude where friendship counts for little, but to succeed, Amy has to re-establish her bonds with old friends and forge new relationships with enemies, old and new. But she finds it hard to think of the handsome Caesar as an enemy, even if he is one of the conquering race.

As she soon learns, it’s not easy to think in simple terms when it comes to the eerily impassive Pronaxians, who never seem to show emotion, not even when taking life as casually as most people would swat a fly. There are factions amongst the aliens, just as there are amongst humans, and Amy must come to terms with the knowledge that her mission could be nowhere near as straightforward or laudable as it might have first appeared. She must also decide whether she’s been asked to act as the saviour of the Earth’s teenagers or whether she’s been set up to be a traitor to her own kind.

I’ve always enjoyed alien invasion as a theme for a book, from War of the Worlds onwards (and yes, I loved Jeff Wayne’s musical version as well!), and I Am Traitor certainly didn’t disappoint. The aliens are well-handled, making them and their background utterly plausible, which makes them utterly chilling, as well. Sif Sigmarsdóttir’s writing style is accessible and well-observed. Her teenagers come over as eminently real, which is not always an easy trick for any writer to pull off, and it was easy to care about them and identify with their plight. The book is a great read, weaving a teenage love story deftly into a fast-paced adventure story, with a modern teenager out of her depth but still doing her best to try to save her world.