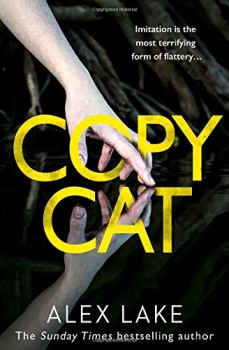 Sarah Havenant has a good job and a family – but this starts to crumble when a friend points out that there are two Facebook pages out there with her name on.

OK, it was all my own fault … I liked the sound of the social media angle to this story. So I was distinctly underwhelmed when it turned out to be yet another serving of domestic noir.

Sarah Havenant is a doctor in small-town Maine. She’s married to Ben, an English lawyer, and they have three children. It’s all very normal until she gets a friends request on Facebook from someone she was at school with. Rachel Lake has moved back to the area – and wants to know why Sarah has two Facebook pages.

It all gets stranger from there. That other Facebook page – which Sarah knows nothing about – has photos of the children and others taken inside the house. And someone has been waiting for Sarah to find that page.

The book’s main problem is that there’s not much of a sense of menace early on, despite what’s happening to Sarah. Then there’s a clunking big reveal halfway through, which I saw coming over the hill from a mile off, and the race for the line turns into a plod.

The snag, too, is that none of the characters really convince, and the baddy’s motive is on the thin side as well – and they might as well be twirling a pantomime moustache. There’s very little to make you care about Sarah and her family. And I’m getting increasingly bored with writers toying with mental health issues as a clumsy plot device and doing nothing useful with it.

One of the pleasures of good crime fiction is being transported to other parts of the world. Author Alex Lake is apparently from the UK and now lives in north-eastern US. But the book lacks any sense of location, and could have been set in any coastal town anywhere in the world. There’s no American feel to it – and I have a feeling that a native speaker, so to speak, would pick holes in the use of US English. There’s no rhythm to the speech – and again, could be English spoken in a number of parts of the world.

It’s really only the sinister use of social media, which will have you paranoidly changing all your passwords, that sets this book aside from the host of others on this increasingly lukewarm side of the genre.