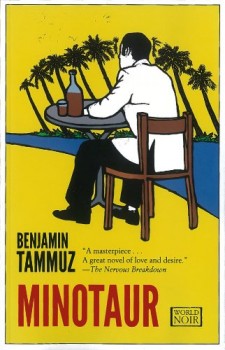 by Benjamin Tammuz (translated by Kim Parfitt and Mildred Budny)

An Israeli spy sees a woman on a bus as someone he has been waiting for to give his life meaning; he intervenes in her life with fateful results.

By chance, Alexander, an Israeli agent operating abroad, catches sight of a young woman who he feels he has been waiting for all his life. He starts a correspondence with her, without revealing much about himself except that he is besotted. She responds, but is deprived of direct contact and forms other relationships as well.

The agent maintains observation of both the girl, Thea, and the men in her life, and is ready to step in to protect her when he feels it necessary. In successive sections of the book we are acquainted with the background of these competitors, and of the agent himself, and come to understand the motivation of the individuals involved in the interaction as the story moves to its conclusion.

Minotaur was written in 1979, and it may be that perceptions have changed in the intervening period. From today’s standpoint, however, the intervention of a man in his 40s in the life of a teenage girl looks less like a romantic compulsion so much as stalking. Twice-weekly letters over a period of years will inevitably turn a girl’s head not necessarily for her benefit, and Alexander’s preparedness to take extreme action should any of Thea’s boyfriends fail to meet his exacting standards is alarming. There may therefore be at least an initial inclination to find the book’s basic concept unhealthy as well as (frankly) unlikely.

The book moves on to safer ground, however, as in consecutive sections we are given the life histories of Thea’s two boyfriends, GR and Nikos Trianda, and that of Alexander himself. All are intelligent, well-educated and cosmopolitan, products of wealthy but dysfunctional families. Nikos and Alexander are both obvious targets for intelligence work, speaking multiple languages and having mixed parentage: either could pass for a range of nationalities. Alexander aside, however, the characters are not instrumental to the plot and ultimately of no real interest to the reader.

As the pivotal character of the book, Alexander’s story is course the most significant. His background is explained in detail and at the end his difficulty in forming close relationships is better understood. Why his contact with Thea should release something he has hitherto been unable to express is, however, still unclear.

The inclusion of Minotaur in Europa’s World Noir series certainly seems justified from the warped nature of the relationship between Thea and Alexander, and the sense of foreboding that hangs over the tale. The back cover includes an appreciative note from Graham Greene, which is interesting: the sense of a doomed relationship is a little reminiscent of Greene’s The End of the Affair. If the relationship between Alexander and Thea had been given greater substance, the book would perhaps have been a little more credible.