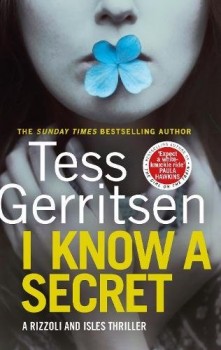 I Know A Secret

Two bodies are found days apart in Boston, both drugged and both mutilated after death, but otherwise seemingly unrelated.

Two dead bodies are found a few days apart in Boston. The cases appear to be unrelated except that both bodies contain significant levels of alcohol and ketamine and both have been mutilated after death. One, a maker of low-budget horror films, has had her eyes removed and left in her hand, while the other, an accountant, has been pierced with three arrows. Neither has an obvious cause of death until forensic pathologist Maura Isles finds evidence of duct tape on the second victim and concludes that they have been suffocated by a plastic bag taped over their heads.

However, there is still little to tie the two murders together until Maura recognises the mutilations as recreations of the deaths of saints, and that the victims’ birthdays fell on those saints’ days. A chance comment from the first victim’s mother directs Detective Jane Rizzoli to an old case. Twenty years ago, a couple and their 22-year-old son, who ran an after-school day-care club, were convicted of child abuse after a young girl disappeared and allegations of assault were made by other children in their care, including both current victims.  Both parents died in prison, but the son has recently been released. Is he killing his accusers in revenge or was someone else to blame all along?

The book explores the can of worms that was the moral panic over satanic ritual child abuse during the 1990s and the dangers of false and implanted memories being used as the basis of convictions, particularly when the apparent victims are impressionable children. Jane’s problems with her family and Maura’s on/off relationship with Catholic priest Daniel Brophy make the characters more than mere ciphers with no existence outside of their work. It is Maura’s relationship with Daniel that triggers her recognition of the victims’ mutilations.

In this, the latest in the Rizzoli and Isles series, Gerritsen’s storytelling and technical knowledge are up to her usual high standard. Most of the chapters are written conventionally in the third person, but one character is written in first person. Of course, we know from the start that this mysterious person will be critical to the story!

I Know a Secret is another assured performance, recommended for those with an interest in the forensic sciences, for fans of the TV series (although the characters’ stories have deviated significantly) and for anyone who likes a good whodunit.