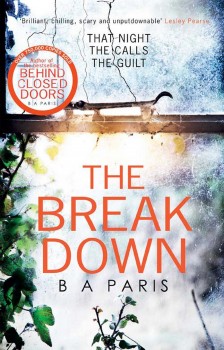 Cass Anderson didn’t want to get out of her car that night in the storm. Now the woman she saw is dead.

On her way home from a party late one night, teacher Cass Anderson takes a shortcut through the woods, against her husband’s advice. She passes by a stopped car and slows down to see if the woman needs help. But the woman ignores her, and with the rain beating down, Cass pulls away. The next day it is all over the news. A woman has been found murdered in her car in the woods. Cass is certain it was the woman she saw. Guilt threatens to consume her. She should have stopped. She should have helped the woman, who turns out to have been a friend.

Within days the calls start – silent calls from the one person who could possibly know she had driven past that car. The killer. And she is certain he is watching her, at home, in town. Increasingly stressed, Cass loses control, and worse still, her memory. At this rate, she’s going to lose her husband, if not her life.

The book is written in the first person, present tense, and I was expecting it to draw me in and take me on an intimate journey. Unfortunately Cass, the main character, did little more than annoy me. Her voice, behaviour and introspections are those I would have expected of a stereotyped menopausal loser, not a young and recently married schoolteacher.

From the opening pages, I was wondering how someone so manipulated and wimpy could possibly control a class of children, and by halfway through the book, I was ready to call her school and advise them to find a permanent replacement! It is not as if she gradually let guilt and fear take her over. That I could have understood. No, her self-interest bordered on narcissism. No wonder her long-suffering husband shipped her off down to the doctor’s.

When a story is written in the first person, the perspective on the other characters is, by default, more constrained. Unfortunately, Cass’s entourage was flat, predictable and it took about five minutes to work out whodunit, and why. This was probably not helped by the uninspired plot and some hobnail-boot foreshadowing.

The story covers a reasonably long timeframe, but the pacing is steady, and Paris manages to increase the tension, if one can ignore knowing who the culprit is from early on. However, that this could all have taken place during the school summer holidays, but instead continued into October, made the plot less realistic: it resulted in Cass behaving in what would seem out-of-character for a responsible underdog. My suspension of disbelief, already hanging by a thread, took a serious bashing.

Although in the end, to be blunt, Cass grows a pair, her personal and emotional growth is too little, too late. I had already found her too irritating for too long to pat her on the back. And even though I am not on the look-out for sex scenes, the intimacy between Cass and her husband came across almost as a taboo subject, with little reference. This surprised me, as it would have been a perfect tool to use in the earlier part of the story to highlight the protagonist’s decline.

That said, the writing style is simple, and this is a lightning read; easy to do in one sitting. It is refreshingly devoid of gore, and although it touches on emotional and mental deterioration, it is not too dark.