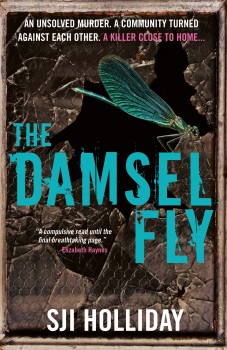 In a small town in Scotland, a gifted girl is found murdered. And the townspeople are determined to take matters into their own hands.

Katie Taylor is a very intelligent, 18-year-old Goth, the only child from her difficult family with the capability and determination to go to university. Neil, her boyfriend argues with her when they discover that their weekly scratch card has won them £5000. That night, Katie is murdered.

Katie’s mother has a dreadful reputation, not only as an adult but also as a child, when she knew and bullied Polly, the new school counsellor. Katie has a sister, Brooke, who is the bane of her life. Brooke is one of those girls who has serious attitude problems, enjoys causing trouble and has no respect for authority.

When Lucas, a biology teacher at the school, confesses to Polly that he had a close, and although not sexual but nonetheless inappropriate, friendship with Katie, the conversation is overheard. This has serious consequences for Lucas.

There are numerous characters who could be responsible for Katie’s murder and the investigation seems to be pointing in no particular direction. Too many of the investigators have close involvements with those who could be the killer.

The principal behind the plot is sound. The characters are quite well drawn and their relationships are interesting and plausible. However, the stumbling block is the way the school is described. The way in which people conduct themselves, the apparent freedom that Polly has to come and go as she pleases, the constant accessibility of the headteacher and his detailed familiarity with all aspects of the lives of his pupils all show little understanding of the scale of a secondary school and the rules and regulations by which they function. The way the pupils are told of Katie’s death has elements of realism but the language that is used and the way that characters are drawn into this very serious occasion are not well understood. The character of Polly is irritating and her fumbling work would not result in her receiving any respect from young people.

For me, the lack of realism of the school environment, which is quite a key part of the book, was too shaky for the book to sustain my respect. This is a shame because I feel that with better research, The Damselfly could have been excellent.