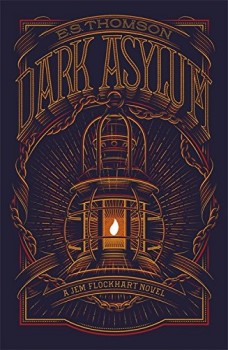 The principal physician at Angel Meadow asylum is found brutally murdered. The police concentrate on the inmates, but apothecary Jem Flockhart and Will Quartermain believe it an act of vengeance.

ES Thomson has wasted little time with this outstanding follow-up to her debut with Beloved Poison, in which she introduced the character of apothecary Jem Flockhart – a woman posing as a man to succeed in her chosen profession and keep a family tradition alive.

The cross-dressing woman is no new phenomenon, either in literature or real life. James Miranda Barry, posing as a man, qualified as a doctor in 1812 and spent her life as an army surgeon with her real identity discovered only after her death. The device allows Thomson to explore the position of women in the patriarchal society of the mid-19th century, which she does with awareness and consideration, some keen observation and occasional flashes of quite scathing wit.

Jem’s deception is aided by a disfiguring facial birthmark and her closest friend, young architect Will Quartermain, but she is not without her trials. Her uncle and father were both judged insane and she is haunted by the fear of inheritance. The possibility that someone will see through her disguise is also ever-present.

She has been freed from the ancient, grim confines of the dark and crumbling St Saviour’s Infirmary, now replaced by a railway viaduct as London continues its Victorian explosion of modernisation, and is practising her trade attached to the nearby hellhole that is the Angel Meadow asylum. Inmates with varying degrees of mental illness are subjected wholesale to the Gothic horror, brutality and questionable science of Victorian mental treatments, many of which would not be out of place in the Inquisition.

The arrogant and bullying Dr Rutherford, its principal physician, is found dead and mutilated with his ears cut off, and lips and eyes stitched together. The police enquiry centres on the inmates, but to Jem and Will the murder appears to be an act of calculated vengeance. Their search for the truth takes them in to the darkest corners of the city – from the deprivation, desperation and criminality of a notorious slum, to a sordid brothel, the gallows, the graveyard and the convict fleet before returning full circle to the asylum.

In a world where guilt and innocence, crime and atonement, madness and reason, are bounded by hypocrisy, ambition and betrayal, Jem and Will soon find themselves caught in a web of dark secrets and hidden identities.

Dark Asylum is meticulously researched and masterfully plotted, and Thomson keeps this complex and harrowing tale moving at almost breakneck pace. It vividly portrays the horror and menace of the poorer parts of the city with  harrowingly gruesome and disturbingly macabre prose which at the same time is engagingly morbid and addictively readable. Never predictable, full of twists, blank alleys and hidden meanings, it is also entertaining, informative and surprising.

The reader comes to empathise with the characters, questioning the definition of victim and further analysing it in the context of the complexity of social and gender inequalities of the period. The book is dark, atmospheric and creepy, reeking of Victorian grime and macabre medical practice. Some detailed scenes – such as autopsies or the reduction of bodies by boiling – are gory in the extreme and certainly not for the sensitive!

Thomson, an academic specialising in the history of medicine, puts her knowledge to full use, to produce an overarching grim atmosphere. She exploits the claustrophobic world of the asylum with its limited cast of characters to the full, blending them with an equally compelling ‘outside’ narrative, to produce a fluently written and eminently readable whole.

But it is Jem, a thoughtful, engaging protagonist, separate from those who surround her, but with a role which provides its own freedom, who as on her debut binds all together as she struggles to solve the mystery – and keep ahead of a killer.