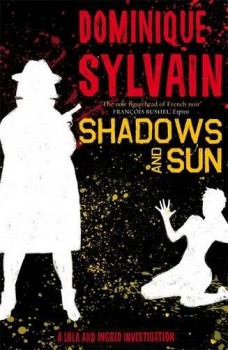 This is the third outing for the redoubtable pair of Lola Jost, an overweight unfit ex-Paris cop in her 60s, and her young American friend Ingrid Diesel, a stripper and exotic dancer. The book proper begins with Jost being interviewed by Hardy, a captain in the General Inspectorate of Police. Armand Mars, a policeman, has been found dead in Abijan, and Jost’s ex-colleague Sacha Duguin is the prime suspect.

Hardy suspects that the death is related to documentary evidence of corruption at a high political level compiled by Richard Gratien, a fixer who acted as an intermediary in a string of dodgy arms deals. Gratien is also suspected of being behind a shooting some months previously, when another policeman, Sebastian Meynard, was killed. Ingrid was with Meynard that day and the trauma has induced her to leave Paris for Las Vegas, where she dances in minimal clothing at the Bellagio Casino.

Motivated by friendship for the accused Duguin, Jost gets to work and Ingrid soon returns to Paris to help her out. The two are put in touch with Joseph Berlin, formerly of the French secret service CBNS, and also with Senechal, a major political fixer, and his companion Mondo. The two women visit the scene of the crime in Abijan, where they are warned off in a very hostile manner. There are various twists and turns before the full story behind the killings becomes clear.

The book contains some elements which will be familiar to readers of the two earlier Lola and Ingrid investigations. Some of the cast are familiar, although few play an active role. Ingrid continues to have difficulty with her French, although the jokes, a sort of reverse ‘allo allo’, don’t really translate very well. The size of the cast and the complexity of the story line remain features; it is not altogether easy to keep track without turning back a few pages frequently to keep things straight.

There are visits to exotic locations: the Ivory Coast and Hong Kong, although neither add much to the plot other than as exotic filler. There are several details mentioned about Hong Kong which do not correspond to what you would find there (yellow taxis, for example). The book also features a couple of lengthy depictions of stripteases which are entirely gratuitous. It occurred to me that the author might be a student of the Ian Fleming school of fiction.

On the positive side, there is the unmistakable taste of a French sensibility which adds a note of humour to the narrative, and the occasional delicious hint of irreverence. Jost refers to the superior figure who figures in her dreams as a ‘white-robed old creep.’ The tale is quirky and moves fast enough to keep the reader engaged, and will appeal best to those who like their entertainment very light.