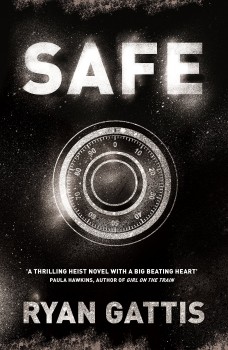 Ricky ‘Ghost’ Mendoza cracks safes for the DEA, and when he opens a safe full of cash decides to take it. Not for himself, but for others, in a last chance for redemption.

Ricky ‘Ghost’ Mendoza is a man with a past of robbery and addiction who broke free thanks to Rose, a girl he met in a cancer ward. Rose died, leaving a punk mix tape and a memory which keeps Ghost on the straight and narrow; he trained as a locksmith with Rose’s father Frank and is now a skilled safe cracker. The DEA have used him for some time to open the safes they find in houses used by drug traffickers.

But when Frank gets into financial difficulty, Ghost decides that it is time to make his move. On his next job he finds far more than he needs to rescue Frank, but has a use for the surplus: he has a contact at a bank who knows how to arrange to clear outstanding mortgages for good people in difficulty. He relieves the safe of nearly $900,000, but knows that with a sum that size, someone will come looking for him.

Ghost’s story is broken by that told from the perspective of Rudy ‘Glasses’ Reyes, key lieutenant for Rooster, a local drug captain. Glasses is not happy to hear that the DEA found very little cash in the safe, since the contents were assembled to give DEA a result, and Ghost’s theft is an irritation to the several parties to the arrangement. In fact Glasses is also informing for Collins of the DEA, and is now worried that Collins may suspect him of deceit.

Unaware of these complications, Ghost knows he has but a short time left and decides to go for broke with more attacks on drug caches. His pursuers are, however, close on his heels, and it looks probable that he will be stopped before his plan makes much progress. At the same time, Glasses is looking for a way to get out of the gangster life, which means an early exit before Rooster finds out who has been giving the DEA inside information which will bring him down.

Both stories are told in the first person present tense, which puts the reader close to the action, and since events move at high speed this is a white-knuckle ride from the first page. Just how closely the text reflects the mental processes of two of the smarter of those in LA drug life is impossible to tell, but the stories they tell feel authentic.

What makes the two protagonists sympathetic is that their goals are not selfish, but focus on family, and that both are aware and deeply ashamed of the harm their activities have brought to others. Survival has involved choices that come back to haunt them, and there is probably only one genuine means of escape from the life. They keep fighting and figuring though. And Ryan Gattis deserves his plaudits.