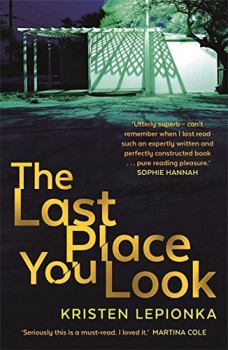 The Last Place You Look

PI Roxane Weary is hired to find a woman who went missing 15 years ago and who may well hold the key to saving a man from Death Row.

Belmont is the sort of small American town where curtains twitch when a stranger walks down the street and a report of a suspicious intruder can turn out to be someone’s neighbour wearing a different coat. But underneath the surface, bad things happen in Belmont.

Fifteen years ago, teenager Sarah Cook disappeared and her parents were found murdered. Suspicion fell on Sarah’s boyfriend Brad Stockton, who was black and from the wrong side of town, enough to assure most people of his guilt, especially when a bloodstained knife was found in his car. Brad was convicted and has spent the last 15 years on Death Row. Time is running out for him now. His execution has been scheduled to take place in two months, but his sister Danielle is still convinced he’s innocent, especially when she thinks she’s recently seen Sarah Cook at a petrol station in town.

Danielle hires private investigator Roxane Weary and asks her to track down the woman she believes is Sarah Cook to help her prove Brad’s innocence. At first, it seems an impossible task. No one remembers seeing Sarah and it’s not long before the Belmont police start warning her off their patch. As far as they’re concerned, the right person is in prison and there’s nothing to be gained by raking up past history.

They’ve met their match in Roxane, though. She’s the hard-drinking daughter of a former cop, killed on duty just over a year ago. Roxane had issues with her father, and never thought she’d lived up to his expectations. The shadow of his loss still hangs over the family. Roxane’s mother clings to the past, while Roxane bickers with her two brothers and occasionally sleeps with Tom, the man who was her father’s work partner for ten years.

Roxane drinks far too much whiskey and has what she tries to kid herself are nothing but casual liaisons with both men and women, but her protestations that it’s only for sex sound hollow even to her own ears. Matters in Belmont become even more complicated when she stumbles on what she thinks are links to one of her father’s old unsolved cases, the disappearance and murder of Mallory Evans.

There’s nothing new about troubled PIs knocking back far too much booze and sleeping around, but Kristen Lepionka successfully breathes new life into an old formula. Roxane Weary is as stubborn as her father and has inherited his flaws as well as his strong points, but at all times she comes over as utterly believable. The minor characters all have life and depth, particularly the 16-year-old daughter of the murdered Mallory Evans and her friend Veronica. Lepionka makes it easy to care about her characters, even warts and all.

The plot is taut and clever, with all loose threads being woven deftly together in complex but entirely believable denouement. Roxane is a flawed main character who defies conventional stereotypes and ploughs her own furrow. In a genre that at times seems full to the point of saturation with borderline alcoholic law enforcement professionals on both sides of the Atlantic, Roxane Weary stands well about the crowd in an exceptionally strong and well-crafted debut.