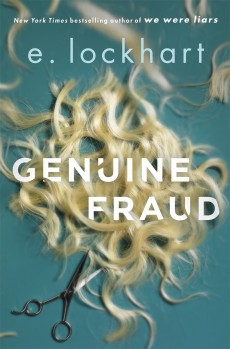 Imogen has everything that Jule wants in life: she’s rich, spoilt and gets everything she wants. Jule is determined to have a slice of Imogen’s cake. Maybe even the whole cake …

Jule is a girl from the wrong side of the tracks – there’s no American dream for her. But it’s impossible to know what’s true and what’s false, as she constantly reinvents herself for every person she speaks to. Imogen is rich and spoilt, with adoptive parents who give her everything she wants. The two girls briefly went to the same school, which provides a connection – however tenuous – that Jule can exploit. And for Juliette West Williams, exploitation is the name of the game. Imogen has everything Jule wants, which makes Jule a very dangerous friend.

It’s hard to know how to describe Genuine Fraud without giving too much away, but with the book jumping around in time like a bullet ricocheting around a metal container, what might be seen as spoilers come thick and fast, but that doesn’t matter as it gradually becomes clear that it’s almost impossible to trust anything Jule says and does.

At first, I tried to keep track of the rapidly-changing timeline, but then I realised that it didn’t matter when – or where – the action was taking place, as E Lockhart does an exemplary job of clearly signposting in text how each chapter relates in time to the one before without it ever becoming heavy-handed.

We learn early on that Imogen has gone missing and it’s apparent that Jule is trying to take over her life, but as the story unfolds, it becomes clear that there is so much going on beneath the surface of both Jule’s life and Imogen’s that you soon learn to take nothing at face value. Jule can’t be trusted, that much is obvious from early on, but Imogen is no angel, either.

Genuine Fraud is clever, intriguing and utterly absorbing. Psychological thrillers are often a hard sell for me, but Lockhart provides a masterclass in how to get it right. Nothing is every heavy-handed, but the tension builds steadily and the reveals, when they come, are all the more effective for the lack of the obvious foreshadowing that so often dogs adult novels in this genre. The characters have more layers than an onion skin, and peeling them back will lead to a few tears!