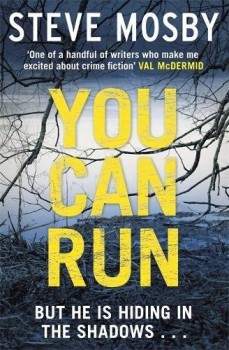 A stolen car crashes into a house, revealing an unexpected depth of horror.

When a stolen car loses control during a police chase and crashes into the garage of a house, doing substantial damage to the structure, the police officers are shocked to find a woman being held captive. She’s bound, blindfolded and has been subjected to horrific abuse. She’s taken to hospital in a critical condition, on the edge between life and death. But that isn’t the only horror to be found in the bland, suburban house. A particularly unpleasant discovery awaits the responding officers in the cellar.

The owner of the house, John Edward Blythe, is soon the most wanted man in the country, linked to a series of missing women over several years and widely believed to be the so-called Red River Killer who has been sending taunting letters to the victim’s families.

DI Will Turner has very personal reasons for wanting to catch Blythe. Although he’s never admitted a connection to the case, his first girlfriend was believed to have been one of the Red River Killer’s victims. Turner keeps quite about this link, even though his emotions are at times clouding his judgment, and his actions cause Turner and his partner DI Emma Beck to almost get thrown off the case. Despite that, Beck still believes in him, but there are times when Turner doesn’t believe in himself.

Despite the almost obligatory prologue and some heavy-handed foreshadowing, You Can Run gets off the starting grid at a decent pace which the book mostly maintains. I liked the characters of both Turner and Beck, even though neither come across as particularly deep, and the backstory didn’t feel too contrived. There’s the inevitable friction in the murder team, with another DI, James Ferguson, being given precedence in the hunt for Blythe. Cue some sniping as well as a few run-ins with their boss DCI Graham Reeves, a man who’s at his most dangerous with a bland expression on his face.

At first, there seems to be very little doubt about Blythe’s guilt, especially as some of the chapters are rooted in his point of view. But there are complicating factors and it’s these that give the book much of its interest as the story gradually unfolds. But it was hard not to feel irritated by Mosby’s odd habit of having the detectives frequently refer to themselves and others as simply ‘detective’ with no attached rank. It kept making me feel like I’d been catapulted over the Atlantic to an American cop show. I also had some reservations about aspects of the final reveals.

Despite that, You Can Run is a solid police procedural with a strong hook that maintains a steady pace. The characters feel real, even the bad guys, which helps enormously in books featuring a serial killer. There are some inevitable echoes of Peter Sutcliffe’s reign of terror which add an extra layer of chill to a book that has already conjured up some pretty horrific mental images.