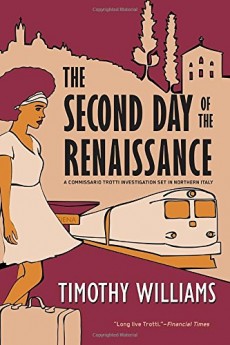 The Second Day of the Renaissance

Just as Piero Trotti is getting used to retirement from the police, he is made aware of a threat from the past. It becomes all too real on a trip he makes to Rome for his god-daughter’s wedding.

Piero Trotti, retired commissario in the police, is called by an ex-colleague in Sienna and decides to meet him en-route to his god-daughter’s wedding in Milan. This colleague tells him that someone from the past is returning from exile and is out to kill him.

On the way to his meeting he happens to meet a young woman on Florence station and they get talking and travel to Sienna together. After the meeting Trotti, although nervous, decides to continue to meet up with his god-daughter’s husband-to be, another ex-colleague, in Rome, in the hope of meeting up again with the girl on the train. He soon realises that she is a bit more than a coincidence and things take a turn for the worse.

The structure of the book starts with a conversation about the past, moves into the present and then jumps back to the past on numerous occasions. In some ways, the story makes more sense on a second reading. Trotti is confused and so is the reader, thus making the final few chapters a bit of a relief when things become more clear.

The very short chapters are helpful in that they present bite-sized bits of information which can be digested before complete bemusement takes over, but they also contribute to the overall confusion in the early stages of the story. This feeling is exacerbated too by the sometimes staccato nature of the dialogue. Trotti’s discussion with a young teenager in a café is like pulling teeth – a wonderful sense of what it might be like talking to a reluctant, yet distraught teenager.

Similarly, little time is spent on descriptions. Pictures have to be constructed quickly, which is another thing that contributes to the slightly off-balance feeling. It’s all very clever as this is just how the newly retired commissario must feel: feeling old, being under threat and indeed under attack at times.

Where there is description it is action–packed, such as when the driver of the car in which Trotti is travelling to the wedding suddenly screeches to a halt and hides in order to watch the following cars go by – with a final punch being delivered as Trotti sees the identity of the driver in the fourth car – all achieved in the space of two pages. Similarly the description of houses and gardens in a village is so fast it is almost missed: “Trotti saw a fountain – water that spouted enthusiastically into the damp afternoon air.”

Some parts of the story are written in italics. The purpose of this generally appears to be to highlight anything from the past, both recent and long ago: for example, an old Fascist slogan; someone giving evidence at a trial in the past; Trotti’s memory of the recent advice of his friend in Sienna; his memory of his god-daughter as a little girl; his memory of the crime scene that is causing the threat; a report written in 1988. Another section is in capitals – the typed pages of a report. Past and present intermingle again and the writing certainly plays with the reader’s head. On top of all this, Italian politics is fundamental to the story. Political history is woven in and out of the story, and there is even some Greek mythology.