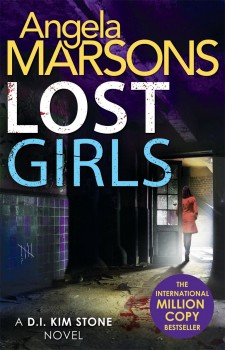 Two young girls are missing. And a depraved auction is about to begin – one which will destroy two families.

DI Kim Stone of the West Midlands Police has more than a rogue reporter who has caused a tragic death on her hands; Woody, her boss, is sweating buckets after receiving a request to send Kim in to head an abduction case. The appeal comes from the mother of one of the two little girls that have been taken from the Old Hill Leisure Centre. This latest case bears a striking resemblance to a double abduction from a year before. One that was never solved. One where only one child came back.

With no evidence to go on, and a catalogue of disasters from the last abduction, Kim’s investigation is a journey through fog. As soon as the kidnapper starts his abominable auction, the parents will be at war to secure their child’s safe return. Only one can come back; the highest bid wins. Not only must Kim control the warring parents, she must also bring both girls back alive. And time is running out.

I am not familiar with Angela Marsons’ detective, DI Kim Stone. But as a lover of good police procedurals, I couldn’t wait to get stuck in to this novel. It’s written in the third person past tense, and with a slightly stereotyped main character, so from the start there was a discouraging air of familiarity. Here’s another feisty female cop in love with her testosterone-infused side. She had a miserable and complicated childhood. She rides a powerful motorbike. She is fighting for her place in the eyes of her boss. She is so close to crossing lines of behaviour that she could be a tight-rope walker. All I was waiting to discover was she had an alcohol and/or boyfriend problem to complete the stereotype.

But I am happy to forgive the above for two reasons. First, the writing is well edited and thoroughly good. Second, the plot is remarkably satisfying with one or two sharp twists. The chapters swing between Kim and her team, the abducted girls, their parents and the criminals. These unravel well like scenes in a TV series, pushing the story forward, and increasing the tension.

The major characters are reasonably well developed, and their behaviour is utterly convincing in the circumstances. Each of the parents reacts differently to their child’s abduction, but all in conceivable ways. However, Kim’s relationship with one of the mothers, while adding a little intrigue, did nothing to advance the story other than revealing one clue for a small sub-plot. Again, it was that feeling of déjà vu, as most detective series, including Sherlock Holmes, have at least one book where there is personal involvement at some level. Although the kidnapped girls’ voices were reasonable, I felt in places their behaviour was almost precocious for nine-year-olds, even bearing in mind the situation.

Marsons manages to hide the head honcho well, although there were, for me, some clear giveaways. The hands-on criminals behave with the required evilness, but their motivations are a bit corny and quite predictable.

There is a good balance of uncomfortably graphic scenes, introspection and dialogue. And the milieu, though generic in some ways, has atmosphere in the detail.Although I would find it difficult to distinguish Kim from the dozens of other detectives I journey with, I find her caring side appealing. Her backstory, whilst there, is not intrusive, and the reader doesn’t get bogged down with her private life.

Angela Marsons has found that heady combination of a sharp story, strong writing and, despite a slightly hurried ending, a satisfying read for lovers of gritty and graphic.