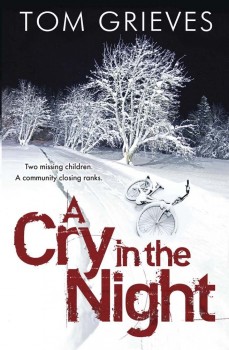 A Cry in the Night

When two children go missing in the Lake District in winter, DS Zoe Barnes and her boss DI Sam Taylor are called in to investigate. Tensions in a small village are running high and there’s even talk of witchcraft.

Duos are eternally popular in crime fiction and always have been. Much of a book’s character can depend on how well the protagonists interact and in A Cry in the Night, Tom Grieves introduces DS Zoe Barnes and her boss DI Sam Taylor and promptly starts to put them through the wringer to see how they’ll react. At first they have a good working relationship amidst what seems to be a rather unreconstructed male dominated environment of their Manchester police station. But amidst a series of bizarre circumstances, the strength of the bond between them is tested to the limit.

Women have been committing some terrible, inexplicable crimes. A woman drowned her own child in a swimming pool and another one drowned her child in the bath at home, and a third youngster had his head repeatedly beaten against a sink. There’s no question of stranger danger in these cases, as the perpetrators were either the victim’s mother or nanny, those closest to the children. So it’s against a background of fear and suspicion that Zoe and Sam are called to the Lake District to investigate the disappearance of two children from a small village.

The community closes ranks and they are making little headway when the dead body of one of the children is found in the nearby lake. Suspicion falls on the grieving mother and it seems that the pattern of dreadful crimes committed by women has been continued in this isolated community.

Zoe and Sam, convinced that the truth is being deliberately concealed from them, have to break through the reticence of the villagers and dig deep into a morass of lies and half-truths. At times the atmosphere in A Cry in the Night is as chilling as the wintery setting and there is a very distinct undercurrent of low-level horror that runs through the book, constantly making me wonder whether Tom Grieves had genuinely strayed into the realms of urban fantasy or whether talk of witches was simply misdirection.

There were some aspects of the story that I found hard to take seriously, but none of those related to the sinister side of the investigation. I found it hard to believe that the recently bereaved Sam would quite so quickly start having what seemed to be rather random sex with one of the girls from the village, risking both his job and his investigation for a few stolen moments of pleasure. The police procedural side seemed somewhat weak as well, with Grieves managing to undermine his own credibility depressingly quickly with an early reference to the long-outdated term WPC, making me jump on my usual soap-box. He also appears shaky on the differences between solicitors and barristers.

But despite these flaws, Grieves still delivers a sinister and chilling story that fits well into the snowy setting of the Lake District in winter, and explores how a working relationship can be tested to breaking point by an unhealthy combination of deceit and suspicion.