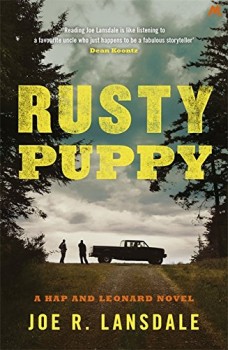 Hap and Leonard investigate the murder of  a young black man and uncover the dirty underbelly of a town.

If you haven’t come across Joe R Lansdale’s unlikely PI pairing before and you’re a fan of noir, get down for some real rough stuff!

Hap, a former 1960s activist and self-proclaimed white-trash leftie rebel and Leonard, a tough, black, gay Vietnam vet and a Republican to boot, will take you into the wild world of East Texas redneck noir, where race underscores everything in this mixture of profane humour and horrific violence.

Lansdale, from the small city of Nacogdoches, population 33,000, which claims to be the oldest town in Texas, brilliantly reflects the area’s 10,000 years melting pot of history from the home of the Caddo Indians, through French and Spanish control to the modern era. He is very Texan, very American, very funny – and above all, a compelling and clever writer.

Hap is recovering from a life-threatening stab wound, a relic of their last outing, when black mother Louise Elton walks into their office to tell him that police in the neighbouring township have killed her son. Her story is that months earlier, a bully cop had sexually harassed his sister, then continued to stalk her. Her brother Jamar, a bright student and top-class amateur boxer, decides to reverse the roles and begins to videotape and take notes of the police harassment. He is found beaten to death in the ‘projects’, a poverty stricken, tough, drug-riddled, all-black area ruled by gangs, and his mother is told he had been in a fight with local gang members.

With the police unwilling to act, and the boy having apparently asked too many questions about a clearly racist local force, his mother begs Hap to help.

Hap is joined by Leonard, returned from an unfortunate experience with online gay dating, and together they stumble their way through the corruption and racial divides that shape their Eastern Texas town.

This is Lansdale at his trademark best. Smart dialogue, colourful characters and an absolutely relentless pace make this a real page turner. There are probably more swear-words and sexual innuendos and references packed into its 250 plus pages than in any other book on the market. Some is good-natured banter between buddies, the rest is the don’t-mess-with-me trash talk so typical of American street life.

But behind their foul mouths and the mayhem which appears like magic everywhere they go, this is a quite simple story of friendship, brotherhood, loyalty, and family. Hap and Leonard are complicated, violent men, but never lose the basic humanity and decency which has made this series such a success.

They don’t just talk dirty. Both are expert street battlers and they fight dirty, too. Readers not put off by the language and some very chilling noir moments will probably feel a sense of guilt over enjoying what is, at the very least, a raw, rollicking adventure.

Some of the humour is deceptively elegant, some of the minor characters – particularly the street-smart, McDonalds-loving, ‘400-year-old vampire’ who provides the key to unlock a sordid mystery of corruption, racism and violence all too common in Smalltown USA – are quite brilliantly drawn.

What is a rusty puppy? The description may make you feel physically sick! But follow its tail down the dark paths of Lansdale’s story, where the worst of humankind is followed by even more of the same and you’ll quickly discover why this unique brand of redneck noir has so many followers.