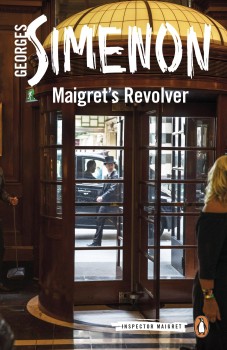 Maigret receives a call from his wife telling him that a young man wants to see him. When he arrives the young man has left, taking with him Maigret’s revolver.

Maigret receives a call from his wife telling him that a young man is at his house wanting to see him. He says he will come but delays and when he arrives the young man has left, taking with him Maigret’s revolver.

Maigret immediately gets his office to contact gunsmiths in Paris to find out if anyone has ordered cartridges for a Smith and Wesson .45 and it is not long before they discover that a young man had done precisely that. Maigret realises that someone who steals a revolver and then buys ammunition has every intention of using it. He has a case on his hands.

Meanwhile, he and his wife have a monthly dinner engagement with a Dr Pardon, to whom had been introduced by the director of the police forensic service. It turns out that Pardon is expecting another guest, a man called Lagrange, whom he had known at school.  He had mentioned that Maigret would be present and Lagrange had given the impression of wanting to meet him. However, although they postpone the dinner for some time, Lagrange doesn’t turn up.

Pardon explains to Maigret that he had visited Lagrange to see if he was ill. He looked haggard, appeared to be in a state of shock and the apartment was in chaos. Significantly, he asked if Pardon had mentioned him to Maigret. It turned out that his young son, with whom he lived, had disappeared. Although suspecting that this might be a coincidence, Maigret decides to see if this young man and the one who called at his home were connected. However this avenue of investigation seems closed to him when it turns out that Lagrange is either insane or pretending to be and provides no information at all.

Luckily, however, Maigret’s general order to be on the lookout for the young man bears fruit when a policeman on patrol notices him and from that point onward Maigret begins to make progress. Rather unusually, that progress requires a visit to the Savoy Hotel in London, where it becomes a case of ‘cherchez la femme’.

There is something amusing about Maigret’s reaction to London. He cannot explain why but he finds that the nightlights seem to shine differently, the night itself is a different colour and even the air tastes different. Whilst he does not object to the hotel regulations, he finds it difficult to see why he should not be allowed to smoke his pipe and to have a drink at whatever time suits him. He is, we realise, very much a creature of habit – of French habit, that is – and finds himself rather out of place when abroad.

Rather unusually for a Maigret novel, there is no tidy ending in which the criminal gets his just desserts. However, it is impossible not to agree with Maigret that, given the circumstances, it is probably the only possible ending and certainly one the sympathetic reader can easily accept.