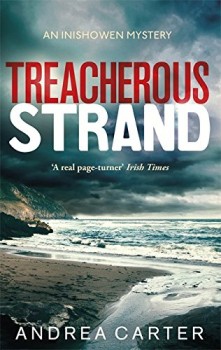 When solicitor Ben O’Keefe is told that one of her clients has apparently committed suicide, she isn’t convinced, and is determined to do some investigating of her own.

Benedicta O’Keefe, usually known as Ben, is a solicitor in Glendara, a small town on the Inishowen Peninsula in County Donegal. She is a sole practitioner, handling a mix of cases: conveyancing, wills and probate and even some minor criminal matters. When Marguerite Etienne, a Frenchwoman living in a rented cottage in the area comes to see her wanting to make a will, Ben takes instructions – the woman wants to leave everything to her daughter – but there doesn’t seem to be any urgency about that matter, so Ben tells her she’ll let her know when the will is drafted and ready for signing.

The following day, Marguerite’s body is found washed up on a remote beach, known locally as the Treacherous Strand. The police believe she committed suicide, but Ben isn’t convinced, and can’t believe that the woman would have come to see her about making a will if she intended to kill herself before signing it. In addition, Ben believes that Marguerite seemed frightened of something – or someone. When her friend Garda sergeant Tom Molloy tells her that the case has been closed, Ben is determined to do her own investigating.

This is the second outing for Ben O’Keefe. She’s a likeable main character and one that I can empathise with, having been a solicitor myself for 25 years. The portrayal of an Irish small town takes me straight back to the towns I know so well in County Clare, and Andrea Carter paints a massively convincing portrait of small town Irish country life.

Ben does have the almost obligatory shadows in her own past – a sister who was murdered – and carries the guilt of not returning the calls her sister made, asking for help, just before her death. It’s that guilt which is one of Ben’s major motivations into Marguerite Etienne’s life – and death. There’s also an added layer of guilt from having failed the woman in a professional capacity, too. But Andrea Carter has a light touch with Ben’s angsty backstory, which I appreciated all the more when set again the all too common tendency at the moment to slap the backstory on with a very large trowel!

Ben’s investigations lead her to Marguerite’s past involvement with a sinister cult with a bad reputation. Along the way, she has to negotiate her complicated relationship – or rather non-relationship – with Molloy, avoid the amorous intentions of a local sculptor, handle a couple of shady, demanding clients and their land deal, and defend the local golden boy against a charge of dangerous driving. Apart from the cult, it pretty much sums up the life of a sole practitioner in a small market town, and that’s very much the book’s strength. It’s all believable, which is a good start for any story involving an amateur detective. With realistic characters, a well-drawn setting and a plot that never strains credibility, The Treacherous Strand builds on Ben O’Keefe’s introduction in Death at Whitewater Church and establishes her as a character well worth following.