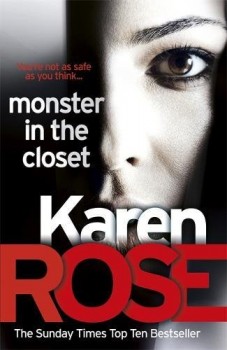 Monster in the Closet

Taylor Dawson comes to Baltimore to work as an intern equine therapist, but also to find her father, from whom she has been hidden by her mother since birth.

Taylor Dawson is working as an intern equine therapist at Healing Hearts for Horses near Baltimore, a facility that provides therapy with horses for children who have suffered severe trauma. She has just completed her degree in psychology, but she has an ulterior motive for choosing this particular place to train. The farm’s security director is Clay Maynard, her biological father. All her life, Taylor was told by her mother that Clay was a monster who would abduct and kill her if he ever found her. Only on her deathbed did Taylor’s mother admit that she had lied about Clay and Taylor has decided to track him down.

Jazzie Jarvis and her younger sister Janie are attending the farm after Jazzie found their mother beaten to death. She has not spoken since and only she knows that she saw the killer as she hid behind a chair. Their father was a top defence lawyer, but he had left them after losing his job three years ago. The evidence seems to point to a homeless drug addict as the killer, but the father’s alibi is suspicious and the police are not convinced. When Jazzie starts to open up to Taylor, they are all at risk from a killer with little to lose and everything to gain.

This is not a whodunit. We know the identity of the killer almost from the first page.  It is more of a ‘will they catch the bastard before he kills too many more?’ The killer is a drug-addicted psychopath masquerading as a professional and family man and the challenge for the police is first to prove that he is the killer, then to protect those that he targets while securing his arrest.

Running in parallel with the murder plot is Taylor’s story, and it plays at least an equally important role in the story. As well as establishing her relationship with her father, she is reconciling it with her love for her stepfather, and her mother’s lies. She is also falling in love with Ford Elkhart, the son of the owner of the farm, and working out what she wants from her life.

There is a plethora of characters, all arriving for a wedding, almost all working in or around law enforcement, and all apparently related. I almost needed a spreadsheet to keep them straight in my mind with all their interrelationships.

The writing is assured and the plot, while satisfyingly convoluted, is relatively easy to follow, although I did feel that too many of the characters had traumatic events in their recent pasts or had an excessively unusual upbringing.