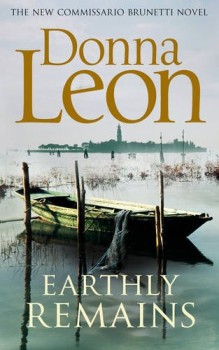 Commissario Brunetti is under strain at work and is sent away for a rest, but then an old man he’s made friends with goes missing.

Commissario Brunetti takes his chance to have a break from work very seriously. He chooses to spend it in a small villa on the Island of Sant’ Erasmo in the Venice Laguna where he used to go years ago. He plans to read and to row and to generally get fit. Casati is an old man who used to row with Brunetti’s father and he offers to take him out each day in his boat. When Casati goes missing, Brunetti feels that he has to help and naturally it spells the end of his holiday.

A great strength of the book is Donna Leon’s ability to create a mood. So, when Brunetti chooses his books to take to the island he carefully chooses a mixture of Greek and Roman classics: Pliny, Herodotus, and Euripides for example. Similarly, he chooses which clothes to take; “a button-down Brooks Brothers Oxford cloth he’d bought in New York that had now matured to the perfect softness……”; “a worn cashmere sweater he’d refused to part with…….”  This and the warmth he feels for the old man Casati and the hug he gives him when he realises how well Casati knew Brunetti’s father all create a sense of security and tranquillity.

Pieces of historical knowledge are constantly woven into the story, whether it is Pliny’s writing about bees as Brunetti is taken to see the hives maintained by Caspati in the laguna, or the physical things such as “the forged swirls and arabesques that still survived among the pieces that had fallen off over the years” – referring to the grating that Caspati used as an anchor for his boat.  All such descriptions feel like the result of really close observation such as that of an artist.

However, very occasionally the detail can get in the way of the bigger picture which is needed as well.  For example, in the description of the villa in which Brunetti stayed it was difficult to put all the bits together to get an impression of the house as a whole. The formality of “The square box covered with a four-segmented tiled roof that peaked in the centre” was hard to rationalise with the subsequent description of the insides.

So, having created such a relaxed mood it is doubly awful when tragedy strikes. Indeed, the book is in two distinct parts: the first half is the calm and gentle period with Brunetti enjoying his rest, and the second becomes an investigation. It is in this part that the author plays with some ideas on a number of different topics.  Brunetti has to face up to some of his preconceptions about care homes and disability. These topics are approached through discussions with people with disabilities, whereupon the issues emerge quite naturally, as Brunetti and his female colleague cleverly negotiate some difficult interviews.

Throughout the book we learn a great deal about the Laguna: about how the tide makes the navigable channels come and go; about the bird life; about things submerged beneath the water that sometimes appear; about the effects of pollution; about the people and the special types of boats that work there.  And finally, what makes it a memorable book is the choice at the end to follow a route of positivity to gain a better future, rather than trying to dig up the past with uncertain chances of success.