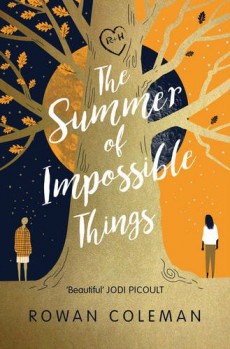 The Summer of Impossible Things

After their mother’s suicide, two sisters fly to Brooklyn to sell the house their grandfather left. There, impossible events offer them the opportunity to change the past and affect the present.

Sisters Pia and Luna are still reeling from the death of their mother Melissa, and fly from their quiet home in the Oxfordshire countryside to Brroklyn. New York, where their mother grew up and met their father, Henry.

They are primarily there to sell the house that Melissa and her sister inherited from their father, but the girls also want to trace the places that were so important to their parents’ love story, and they’re looking for answers, including why their beloved mother took her own life. And why, only when she was gone, did Melissa choose to share a painful truth with Luna, via a recording left for her, that Henry wasn’t her biological father.

Luna and Pia stay at a guest house owned by a woman who knew their mother and her family well when she was a girl, and immediately start to get the impression of a woman they barely recognise. Young Melissa was a strong-willed woman, a happy, free spirt from a devout Catholic family with deep ties to the mob and a sense of community instilled in her from birth. The Melissa they knew was a sad woman, despite her love for her family, who’d battled with depression and drink for all their lives. They are determined to find out what happened to their mother to cause such a change in her, and to eventually lead to her suicide.

Luna has had a vivid imagination for as long as she can remember, seeing things that weren’t there. But in Brooklyn her visions start to get worse, and without warning she finds herself back in time, in 1977, face to face with her mother and her friends, in the days leading up to Melissa running away from Brooklyn to England to be with Henry.

At first Luna thinks she’s ill – that her visions are being caused by a brain tumour, or worse. But as her presence in the past begins changing things in the present, she starts to understand that her trips back in time are real. She gets to know Melissa’s friends, her fiercely loyal sister Stephanie (who never even came to their mother’s funeral) and the perfectly handsome Michael who might just be the man of Luna’s dreams. Between the films their mother has left for them, and Luna’s visits into the past, the sisters begin to wonder if they can stop what happened to Melissa, and if Luna can save their mother’s life – even if that means sacrificing her own.

Worry not, the complexities in the characters and the plot are handled with far more skill in the novel than in my summary! Although not my usual sort of read, I devoured the book in a single afternoon, eager to know what would happen but at the same time not wanting to reach the end. Rowan Coleman’s characters come to life instantly, and you get to know them as surely as you know your own friends. Even as the impossible events in the title unfold, you’re right there with them. Coleman creates two worlds, side by side, which you can feel as comfortable in as Luna does.

The close relationship between the sisters is real and touching. Their interactions with the world around them as they visit the places their parents went to, try to live a little like they had, see and feel what they did in a city so far removed from where the girls grew up, all add up to a luscious, rich tapestry in which the story plays out.

There are twists in the complex plot, and as the inevitable end approaches, it’s difficult not to get lost in a couple of them. It’s the sort of novel that will leave you trying to unravel the web long after you finish it. I felt just a little cheated. But actually, and unusually, it doesn’t matter how it finishes – it’s one of the most rewarding reads I’ve picked up, and that is down to the intimacy of the characters and the loving detail about the places they inhabit.