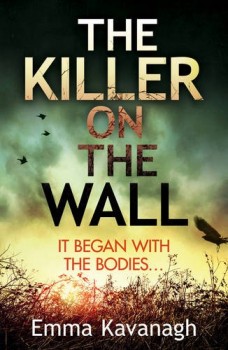 The Killer on the Wall

The three villagers leaning up against Hadrian’s wall could have been asleep, but even from a distance, 15-year-old Isla Bell knew they were dead.

Twenty years ago, Isla Bell, then only 15, found three fellow villagers, Kitty, Ben and little Zach. They had been murdered. Nearby and barely alive, the sole survivor of the massacre, was Ramsey, Zach’s brother. They were the first. By the time Isla’s father, DS Eric Bell, caught the murderer, Heath McGowan, he had slain three more people, including his pregnant girlfriend.

2016, and Isla and Ramsey are married, and back living in Briganton. She is a forensic psychologist, he is a journalist. Both are driven by the horrors they lived through.
Isla should feel safe watching McGowan; after all, he is just number 13. He is the other side of the window, under guard, and inside an MRI scanner. But his presence more than disturbs her.

Ramsey should be writing an article. But he isn’t; he is trying to talk Stephen Doyle, widower of one of the victims, out of taking his life. DC Mina Arian should be at home. She isn’t; she is with Victoria Prew, a Briganton resident, who feels she is being stalked.

Nothing in Briganton is as it should be. And when a body is found, leaning up against Hadrian’s Wall, Isla, Ramsey and Mina know nothing will ever be quite the same again.

Although this story is written in the third person past tense, Emma Kavanagh’s writing style lends itself to intimacy and a sense of the here and now. Each chapter is devoted to one of the main characters, and with convincing introspections and behaviour, Isla, Mina and Ramsey are well rounded. Each of them is flawed but likeable. Each of them is real and understandable. None of them have been physically described to within an inch of their lives. What a breath of fresh air! I found the lesser characters two-dimensional, which irritated me. But none are overly stereotypical.

The plot points towards the predictable; a serial killer in jail when the body-count starts rising; the MO suggests a copycat killer; or did the original murderer have a partner who never came to light? However, this story intrigues. It could trip the reader up, and although not the fastest-paced, it never takes its foot off the accelerator.

Atmosphere and milieu bleed from the pages. Briganton is not a place I would want to visit. Hadrian’s Wall has lost its charm. It is rare I come across a writer who writes so well about a place that I have an image of it in my head. Kavanagh has succeeded.

However … there are points that left my suspension of disbelief in shreds. A university that allows its forensic psychologist to work closely with the serial killer who turned her life upside down. A killer who has the time and ability to drag bodies out of the village and up to the wall without being noticed, both now and 20 years ago. A celebrated detective whose psychopathic mind no one had picked up on, his forensic psychologist daughter included. Main characters who systematically reach similar conclusions at the same time, yet never share their thoughts. And as I had worked out the real perpetrator in the first few minutes, how come none of the characters had?

There were other weak points: the sheer number of red herrings and flaky twists gave the second part of the book an almost hysterical feel, and none were convincing or strong enough to make me waver on my rapid decision about whodunit.

I have mixed feelings about The Killer on the Wall, yet I enjoyed the book more than I wanted to. Its scant adherence to chronology could have left a mess on the page, but Kavanagh somehow managed to use that aspect to create atmosphere. Its indecision about who the protagonist is could have weakened the storyline but it makes it more interesting to have two people uncovering the truth from different angles.