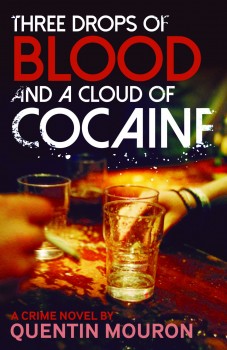 Three Drops of Blood and a Cloud of Cocaine

When old Jimmy Henderson is found dead in his car, mutilated with a knife, both local sheriff Paul McCarthy and Franck, a visiting private detective, take an interest.

This is an unusual book which defies several of the conventions of the crime genre. It begins in a fairly straightforward manner, in the present tense throughout. A man sitting in a car on a Boston street is approached by a stranger. Not so far away McCarthy, the local sheriff, is attending a piano recital, in the company of Franck, a visiting detective. McCarthy is called in when the man in the car, Henderson, is found dead, his throat cut, with further mutilations post-mortem.

McCarthy proceeds to deal with the crime as you would expect, and soon has a man in custody, although there are doubts as to his guilt. A possible drug connection attracts the interest of Sergeant Wilde, a federal man, and there is the typical friction between the two agencies. The author introduces Le Carre, a key figure in the local drug trade, providing clues as to the motive behind the killing.

Intervening passages dealing with Franck, however, take on a bizarre note. Franck expresses scorn on the general opinion that the manner of Henderson’s death is horrific, and takes the matter as a mildly interesting joke. We are in the first few pages introduced to the contents of Franck’s suitcase, which include weaponry as well as means of indulging his decadent tastes, including a quantity of cocaine to which he has frequent resort.

And as we are given more information about McCarthy it becomes clear that he too is not entirely what he appears to be on the surface. Hidden under a pattern of rectitude and regular habits is a man weighed down by the crime he has to deal with on a day-to-day basis, worried by an apparent slide into anarchy and terrified that he may be unable to protect his family from the multiple threats of an increasingly violent society. As the book progresses, the behaviour of both men becomes increasingly bizarre, Franck combining business with pleasure in apparently random violence, and the sheriff eventually coming together with Franck in an orgy of everything he seemed to stand against.

The game-playing and philosophical aspects are foreshadowed by the Dostoevsky quotes which begin the book, and extensive quotations from a work by Peladan, which Franck is fond of dipping into. In a later passage, Franck speculates about himself as a literary character. All this is likely be a great source of amusement to those who like intellectual jokes, and given the number of ways the reader’s expectations are foiled it is all done very well.