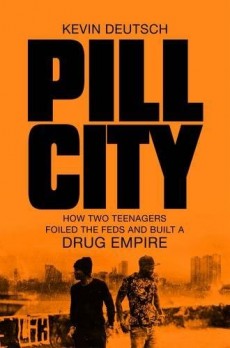 The true story of two tech-savvy Baltimore 18-year-olds who created a dark web drug delivery service for legal and illegal opiates across the US.

The TV series The Wire brought Baltimore to the world’s attention as a place where drugs had a serious grip. This book tells the tale of changes in the gangs that supply opiates during a fairly short period – the final eight months of 2015. Reporter Kevin Deutsch interviewed gang members, addicts and police to put together a comprehensive view of what was going on.

Key players in the events of the year were two teenagers, Brick and Wax, familiar with the drug scene, black kids of addict mothers born into a society saturated in narcotics. What made them unusual was their interest in reading, and their facility with computers. This enabled them to develop software which could be used by suppliers and users with anonymity, initially in Baltimore and later in cities across the US.

The two recognised an opportunity to seize a stake in the lucrative drug market during the street riots following the injury and death of a man taken into police custody. Using their links to the BGF, the Black Guerrilla Family gang, the pair organised raids on pharmacies to gather prescription opiates under cover of the general disruption, and stockpiled huge caches. The drugs were then retailed under the name Pill City at low prices, undercutting opposition and carving out a major share in the trade.

While the story is interesting for the impact a couple of street kids can make and the huge sums of cash they were able to amass, the story is largely one of squalid addiction. One can only deplore the readiness of many of the characters depicted to benefit from the misery of others in their community, not that their success commonly lasts more than a few years at best. The violence is pervasive and equally squalid, with nothing by way of glamour.

What is most eye-opening is the transformation of the drug trade by the increased use of ‘legal’ opiates, including OxyContin and Vicodin, after a campaign in the mid-1990s for relaxation in their use on the basis they were ‘safe’. Production of oxycodone-based painkillers soared, and apparently today approximately 1.9 million Americans abuse prescription opiates. Mexican drug cartels, suppliers of illegal heroin, have had to struggle to keep up.

Addiction has become a problem with all groups in society, but gets more attention and more funding in white neighbourhoods. Everyone knowledgeable about the trade agrees, however, that current levels of funding are nowhere near adequate to make a serious impact, regardless of location, and things are unlikely to improve under the new administration. And wider use of covert communications systems is going to make it even harder for the authorities to make an impact.