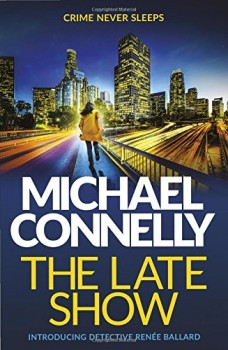 Detective Renée Ballard works the night shift in Hollywood, starting cases then handing them on as each new day rolls around. But now there are two investigations that she wants to stay part of. Unfortunately, her bosses don’t see things the same way.

In The Late Show, Michael Connelly introduces a new main character for the first time in over a decade. Renée Ballard has been relegated to working the night shift in Hollywood in the aftermath of a failed sexual harassment complaint against a more senior colleague. Her partner at the time failed to back her up, breaking their working relationship beyond the point of repair.

Ballard has come to like the late shift, even though it does inevitably mean that she doesn’t get to see many cases through to fruition, as every morning she hands over to the day shift, before heading to the beach with her dog for some paddleboarding.

But that all changes one night when she picks up two cases that she wants to see through. The first is the brutal and torture of a transgender prostitute, left for dead in a car park, and the killing of a young woman, along with several others, in a multiple shooting in a nightclub. Ballard doesn’t want to hand these over when her shift finishes, but it’s quickly made clear that that her bosses don’t want her sticking her nose into the nightclub shooting.

Connelly quickly establishes Renée Ballard as a likeable and interesting character. She’s tough and at times stubborn to the point of pig-headedness. The backstory isn’t laid on with a trowel, which I was thankful for. She lost her father in a surfing accident when she was a teenager and had a year of fending for herself before being taken in by her grandmother. Then her career had stalled because she stood up for herself, but in comparison with most other protagonists in crime novels now, that all counts as positively well adjusted!

The plot, as I’ve come to expect from Connelly, is satisfyingly complex without being overly convoluted. The characters are all well-drawn, from the reluctant witness who has to be cajoled into handing over his phone, to the sleazy, pushy car salesman who comes under scrutiny in the case of the attack on the prostitute. There were times when I saw twists coming and times when I didn’t, but nothing about the book can be described as predictable.

The Late Show proves that even after more than 30 books, Michael Connelly can still lay down the foundations for another series with admirably consummate ease. I came late to his Harry Bosch series, so I’m very pleased to be there for the start of his next one.