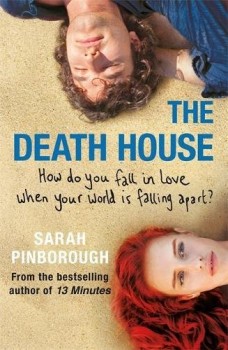 Toby lives in the Death House, isolated from the world, confined with others who have tested positive for a defective gene. There’s only one way out of the house, and that’s not one any of the inmates wants to take.

Seventeen-year-old Toby lives in a large house with other teens and even younger boys and girls. They receive lessons from teenagers who do everything possible to avoid emotional engagement with the kids, and regular checks from hatchet-faced nurses who take dispassionate to extremes. This could be just like any other school, but it isn’t. The kids aren’t free to leave. Ever. The only way out is via the Sanatorium at the top of the house, accessed by an antiquated lift that carries sick children away, never to be seen again.

Dorm 7 are doing well. They’ve not lost anyone recently to the mysterious illness that the sinister and hated Matron and her nurses are constantly on the lookout for. When the disease strikes, it progresses rapidly and those with the defective gene know that they won’t leave the Death House alive.

The central premise of Sarah Pinborough’s latest book is chilling, and she exploits that to the maximum in this story of teenage love set against a bleak backdrop in which children are ripped from their families and kept in isolation until they die.

Toby thinks of himself as the kingpin of Dorm 7, and the night is his preserve. It’s the time he has the house to himself and can go where he wants, providing he doesn’t take the sleeping pills doled out every night to the inhabitants of each of the dorms. When he meets Clara, the newest resident of the Death House and another explorer of the house after dark, Toby isn’t impressed and doesn’t want to share his kingdom, but gradually they grow closer and Toby has to face up to the fact that he’s finally allowed himself to care for someone again.

The Death House is a dark, compelling and in places utterly heartrending young adult thriller-cum-love story. Pinborough’s kids and teens are well-characterised and Toby makes a credible narrator. There’s Ashley, struggling to lighten the lives of the Death House inmates with religion, Louis and Will who are as close as two peas in a pod, Jake, a bully from another dorm who’s capable of taking the difficult decisions others want to avoid. They all play their part in this dystopian vision of what could happen to anyone found to be in possession of a defective gene. This is a book that will tear your heart out and stamp on it, but I had to read to the end. There are no easy ways out of The Death House.