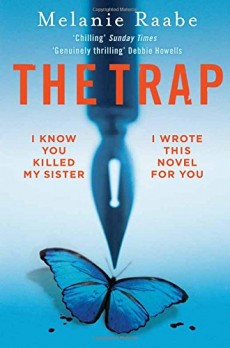 Reclusive famous writer Linda Conrad has seen the reporter’s face once before – the night he killed her sister.

For the last 11 years, Linda Conrad’s world has been measurable in metres squared. A recluse who never steps outside her own front door, the famous writer lives alone with her dog and her imagination. Until she sees Victor Lenzen’s face on the TV, and reality bursts her fragile bubble.

He is the man she saw lurking in her sister’s apartment 12 years before on the night she found Anna dead, stabbed seven times. He is now a famous reporter, enjoying freedom, having never been caught.

Linda forms a plan. She will write a book, veering far from her normal genre. A thriller about a girl whose sister was killed. She will invite Lenzen to give her a rare interview, and trap him. But who will be the cat and who will be the mouse in her deadly game?

The Trap is written partly in the first person present tense with the voice of Linda, the recluse. This alternates with excerpts from her thriller where her protagonist is indeed herself, renamed Sophie. These chapters from Linda’s book, written in the third person past tense, are a clever way of dealing with much of the backstory and showing why the police had never found her sister’s killer.

The two writing styles are distinct, which would be impressive for a debut author if the thriller-chapters were not such mediocre writing. The question of whether anyone would seriously publish Linda Conrad’s books drew me far away from what should have been an intimate read. They felt rushed, flat, with too much tell and not enough show, and left my suspension of disbelief hung, drawn and quartered. The chapters devoted to Linda are, in terms of style, definitely the book’s saving grace. Her introspections and descriptions are sharp and sensory and show an author with good observational skills.

Melanie Raabe has brought her protagonist to life, but her other characters, including the murderer, are two-dimensional. And sadly, Linda is not a character who is easy to empathise with. From the start, she comes across as self-obsessed and needy rather than someone to root for. Having no first or even second-hand experience of someone with a severe agoraphobic condition, I was on a journey into the unknown and looking forward to it. Unfortunately, commonsense made it hard to believe many of Linda’s out-of-character actions. Moreover, her lack of emotional reaction to finally stepping outside her house was questionable.

Linda’s behaviour, particularly in terms of entertaining therapists and experts, comes across as an author throwing mustard onto her story to spice it up. Which is a shame, because the plot is a good one with plenty of twists and moments of self-doubt from the protagonist.

The final chapters are a protracted reveal. Although the author has tried to mask this, it still comes across as the murderer bragging with all the subtlety of a Punch and Judy show.

That said, Raabe’s treatment of Linda’s evolving relationship with her dead sister is, while fast becoming a bandwagon-ride in suspense and crime stories, well done. The Trap is a good debut novel with an intriguing plot, together with plenty of suspense and a sprinkling of violence.