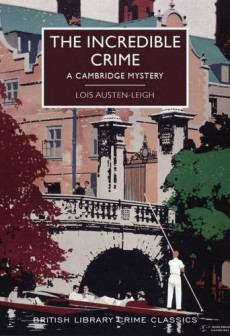 Spirited, beautiful, and unconventional Prudence Pinsent, daughter of the Master of a Cambridge college, hears of a drug smuggling ring which implicates a close relative and sets out to discover the identity of the gang who will kill to protect their secret.

The British Library has done a great job of bringing forgotten classics of the Golden Age of crime fiction to the attention of modern readers. No more so than in the case of Lois Austen-Leigh, author of four hugely successful crime mysteries in the 1930s which have since dropped totally from literary sight – even experts in the period have hardly heard of her.

Austen-Leigh, who began writing as a child around the turn of the 20th century, was the granddaughter of Jane Austen’s favourite nephew, and is reputed to have written on the same writing desk used by her great-great aunt. That is not the only similarity. The use of a gently ironic narrator to give distance and a carefully crafted narrative which bridges both modern and traditional, town, academia and country, reflects Austen’s influence on her relative.

Owing a good deal to Northanger Abbey, this mini-masterpiece of a county house mystery is of the same genre – one which questions its own values even while parading them as central to the plot.

Prudence Pinsent, is the daughter of the Master of a Cambridge college. Approaching her 30s, she is spirited, beautiful, and unconventional. She smokes, can swear like a trooper, drives fast cars and rides to hounds, and is perfectly at home in either the rarefied atmosphere of academia or among country gentry. She is approached by a coastguard friend for help in the capture of a drug smuggling ring which appears to implicate a close relative, Prudence sets out prove his innocence by discovering the identity of a gang prepared to kill to protect their secret.

It’s hardly a 21st century crime novel. Fans of Tartan Noir won’t find enough gore to even soak a small tissue! Set in a venerable college and an even more historic country manor, it is instead an exquisitely written, humorous, gently satirical look at the hot-house of academia which was Cambridge in the 1930s and contrasting it with the insularity and near benevolent feudalism of an isolated coastal estate and its village.

Austen-Leigh’s descriptive powers, particularly writing about the wild beauty of the Suffolk coast, rival anything of her more famous relative and her pertinent observation of the rituals and rivalries of college life are among the best I’ve read. Much of it seems to be based on her own life. Her father was a prominent country vicar and her uncle Master of King’s College, she served with the Red Cross during the First War, then moved with her sister Honor, a nurse in Malta and France, to the emerging artistic community of Aldborough.

Their friends and neighbours included composer Benjamin Brittan, who played the piano to accompany Honor’s viola, and author MR James, who was to succeed her uncle at King’s College. Austen-Leigh herself was certainly unconventional. When her father ministered in rural Gloucestershire and Berkshire, she raced around on a motorcycle – unheard of for young ladies of a certain class! She was a member of the aristocratic country set – and rarely misses the chance in this fascinating insight into British high life to remind them that their own ancestors may have gained their titles and respectability through brutal or even criminal means.

This is a lovely book, featuring some near unbelievable but adroit plotting, humour and drawing together of the academic and rural mystery genres in an entertaining whole. There’s plenty of diversions with excursions into the smuggling traditions of the Suffolk coast, intelligence services, spies, ‘modern’ policing, the pleasures and dangers of the hunting field and country house life – even the dangers of romance!

For lovers of the Golden Age, this exquisite, gentle, yet surprisingly astute story is an absolute must. For those who just like a good tale, it is well worth the read. The only question is why was it out of print for so long?