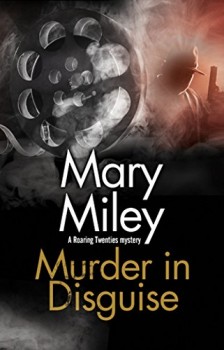 Hollywood script girl Jessie Beckett investigates the killing of a cinema projectionist and finds a link to crimes committed half a world away.

Jessie Beckett was orphaned at the age of 12 and brought up by various vaudeville acts on the circuits where her singer mother had appeared. They made use of her juvenile appearance, her song, dance and acrobatic talents and in return took her into the huge family of vaudeville, America’s major entertainment before the advent of films, shortly followed by movies. They also lived up to their reputation as the itinerant ‘gypsies, tramps and thieves’, immortalised in singer-actress Cher’s 1971 first million-selling hit. They worked six days a week, with Sundays devoted to moving to the next venue.

They were never in one place for long, many became involved in petty crime and Jessie also learns useful, but hardly legal skills, such as lying with a straight face, theft, pickpocketing, fare avoidance and lock breaking. Mary Miley’s heroine of her Roaring Twenties mysteries is no plaster saint, but despite her sometimes cavalier attitude to the law, has a strong sense of right and wrong and the brains and skills to unravel problems or get herself out of trouble.

Taking her life rather more sedately after a frightening episode which ended in a gunfight with gangsters, Jessie is working as a script girl at the Fairbanks-Pickford studios just as Hollywood begins to enter its golden age. America’s sweethearts, the dashing Douglas Fairbanks and his beautiful actress wife Mary Pickford, both get substantial walk-on roles in this clever and well-written first-person narrative centred on the arts of vaudeville and on crimes committed years before and half a world away.

But Miley clearly believes that if you are going to drop the names of real people into your story, you should go for it big time. Jessie shares a house with that fabulous femme fatale Myrna Loy – Franklin D Roosevelt was one of her greatest fans – then a struggling bit part player. Charlie Chaplin and Helen Keller also feature and great names from the vaudeville stage such as the exquisite and multi-talented Adele Astaire, and her slightly less gifted brother, Freddie (!) all have roles to play. Even LA’s major Prohibition gang boss, Joe ‘Iron Man’ Ardizzone hovers menacingly in the background.

When a cinema projectionist is shot dead during the ninth reel of Chaplin’s Gold Rush, his widow, who also works at the studios, asks Jessie if she can find the killer. Fairbanks, who knows his employee’s reputation, gives her time off and money to pursue her hunt. She – and the police – face a blank wall. Who was the man in the instantly noticeable red coat who fired three shots at his victim and how could he enter and leave a crowded cinema without being noticed?

Jessie begins to dig into the rather unpleasant dead man’s past and uncovers a trail of murders across America, all carried out in similar fashion and with the killer apparently simply disappearing, which finally lead her to dark secrets from another continent and another era.

Miley draws all the strings together in a masterful fashion. Every name – even Helen Keller, the author, political activist, lecturer and occasional vaudeville performer, the first deaf-blind person to earn a BA degree and subject of the play and film The Miracle Worker – serves as a template for a touching sub-plot involving a deaf and dumb orphaned girl.

There’s plenty of colour, some of Jessie’s reminiscences are both funny and informative, such as how Fairbanks, who did all his own stunts, arranged that fabulous scene from The Black Pirate where he rammed his knife into a sail and slid down the growing rent. Miley has a sharp eye, a clever mind to carry a complicated plot and real writing talent.