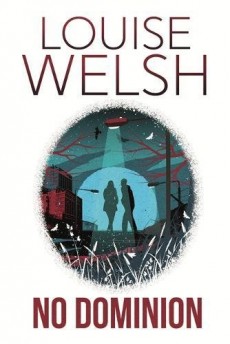 The community of plague survivors on Orkney is threatened by the arrival of three strangers.

Louise Welsh’s grim post-apocalyptic Plague Times trilogy reaches a conclusion in No Dominion. I’m an absolute sucker for anything of this nature, avidly watching both the original series of Survivors in the 1970s and its more recent re-make, and Welsh certainly hasn’t disappointed me.

Seven years ago, a mystery plague, known as the Sweats, wiped out much of the world’s population. Stevie Flint, a shopping channel presenter in the pre-apocalypse world, is now the democratically elected president of Orkney. There, survivors are doing their best to rebuild their shattered lives, raising animals, living off the land and trying not to think too much about what their lives were like before plague ripped its way through the world’s population, leaving chaos and hardship in its wake.

Amidst the population on Orkney are various teenagers, many taken in as almost feral children after the deaths of their parents by people who has lost their own children to the Sweats. As ever for youngsters the grass often seems greener in the other field, and when three strangers arrive by yacht, the teenagers are drawn to them like moths to a candle.

Magnus McFall, once a stand-up comedian and now foster father to 16-year-old Shuggie, is willing to vouch for the group, as he once had dealings with the woman called Belle, and believes she’s trustworthy. But that trust vanishes when Belle and her companions vanish with Shuggie, his friend Willow and several other island children. To make matters worse, it appears they’ve kidnapped a baby and murdered an island couple.

Stevie and Magnus set off in a pursuit that takes them first to the mainland and then across to Glasgow. The world outside the Orkneys is a lawless, hostile place, where no one can be trusted or taken at face value. Children are commodities to be sold to the highest bidder and teenagers are vulnerable to any adult who wants to abuse them. No Dominion presents a bleak view of humanity. Even the children are more Lord of the Flies than Coral Island. There’s very little human decency on display anywhere, although when that does shine through, it’s doubly welcome.

Nothing is ever sugar-coated in Welsh’s world, and I must admit, my heart sank when we were introduced to Stevie’s dog, large, loyal Pistol. I spent most of my time expecting Something Bad to happen, which did detract from my enjoyment in places. And on the subject of dogs, the only time when I felt Welsh had dropped into cliché was with the description of rabid dogs in Glasgow. Currently, rabies in both the dog and red fox populations in Europe is a very long way from the English Channel and it seems hard to believe that they would reach the UK via the Channel Tunnel in only seven years. But that’s a minor niggle.

The Plague Times trilogy is an excellent depiction of how far and how fast our so-called civilization could fall given the right stimulus.