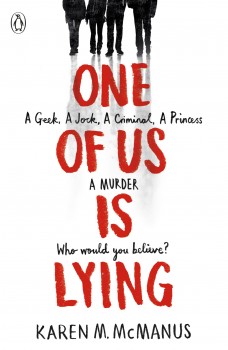 One Of Us Is Lying

Five students go into detention at Bayview High School, but only four come out of the classroom alive.

Five students at Bayview High School end up in detention for having mobile phones in the classroom. They all deny owning the phones and claim they’ve been planted, but that doesn’t cut any ice with their teacher, Mr Avery. The teenagers are left alone when their teacher goes out to see is anyone has been hurt in a minor car accident outside. Minutes later, Simon Kelleher collapses after having a drink of water, and later dies.

Suspicion immediately falls on the four who were in the room with him, but matters are complicated when it becomes clear that any number of people might have wanted Simon dead. Simon ran a notorious gossip website, devoting his time to digging out the juiciest titbits about anyone and everyone in the school and publishing them, with no thought or care for the consequences, which didn’t exactly put him in the running for most popular boy in the school.

His companions in detention were Bronwyn Rojas, an academic high-achiever destined for a place at Yale; Nate Macauley, the school’s bad boy, already on probation for dealing drugs; Cooper Clay, an all-star baseball pitcher already being headhunted by major league teams, and Addy Prentiss, more renowned for her stunning looks than anything else. When the police start to look in detail at Simon’s site, they discover that all four of the others have secrets they wanted to keep, but Simon didn’t care whose lives he wrecked.

One Of Us Is Lying is a great YA school mystery, with a varied bunch of characters, all of whom take a hand in telling the story from their own perspective. The series of short sharp chapters, all from different points of view, push the story along at a brisk pace. Chapter headings with the name of the person narrating that section prevent confusion and the characters soon establish themselves, providing a range of different points of view.

Despite warnings from various lawyers not to be seen associating with each other, they gradually grow closer together, drawn by shared experience and shared jeopardy. Each of the teenagers have their own story to tell and their own problems to face. Karen M Malone does a good job of weaving a character-driven story into a classic locked room mystery. Each of the four progress and develop in realistic and at times moving ways.

I was sucked in by McManus’s tightly-drawn, well-portrayed story of teen friendships, problems, secrets and lies. It’s a book that you’ll want to devour in one sitting. I couldn’t put it down until I’d unlocked all of its secrets.